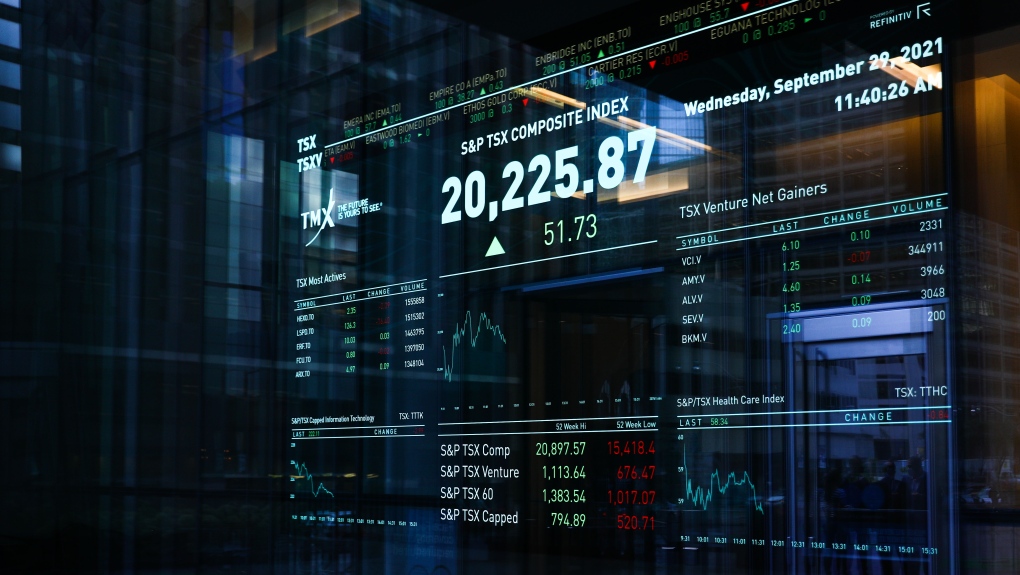 A sign board displays the TSX in the Richmond Adelaide Centre in the financial district in Toronto on Wednesday, September 29, 2021. THE CANADIAN PRESS/Evan Buhler
Vancouver -

British Columbia's securities regulator is accusing a North Vancouver man of failing to disclose material information about a company for which he was an executive, as well as engaging in insider trading.

The commission outlined the allegations against Morabito in a news release Friday, saying that the North Vancouver resident was the executive chairman and a director of Canada Jetlines in September 2017, when the company announced that it had entered into a letter of intent to lease two aircraft.

The announcement stated that the planes would be delivered in April 2018, and that the ultra-low-cost airline would begin flight operations in June of that year.

According to the BCSC, the letter of intent was terminated in December 2017, "after Canada Jetlines tried unsuccessfully to extend the payment terms."

The termination was a "material change" to the company's situation, and it led to a delay to the start of flight operations, another material change, the commission said.

Canada Jetlines did not make the news of either of these changes public until three months after they occurred, a delay the commission said constitutes a violation of the B.C. Securities Act.

When the company published news of the termination and delay on March 13, 2018, its stock price decreased by 38 per cent over two days, according to the BCSC.

During the period between the termination of the letter of intent and the public release of that information, the commission alleges that Morabito transferred 352,945 shares of the company to his spouse, with the knowledge that the shares would be sold.

The BCSC alleges that this transfer of shares constituted insider trading.

According to the commission's notice of hearing, Canada Jetlines' share price was $1.42 before the March 13 announcement. By March 15, it had fallen to 87 cents.

A winter storm is battering southern Ontario and parts of Quebec Monday, with anywhere from 15 to 50 centimetres of snow expected to fall across the provinces.

Canada's largest airlines and the country's busiest airport are asking the federal government to drop its rule requiring mandatory arrivals testing for COVID-19.

At an office building in China's capital on Sunday, masked COVID-19 control personnel lugged boxes of pillows and bedding through the closely guarded entrance for workers stuck inside, preparing for what may be days of lockdown as Beijing rushes to prevent the spread of Omicron ahead of the Winter Olympics.

Moderna Inc's vaccine candidate against the Omicron coronavirus variant will enter clinical development in the next few weeks and the company expects to be able to share data with regulators around March, CEO Stephane Bancel said on Monday.

When it comes to fighting climate change, a Toronto-based architect says personal actions, such as driving less or limiting red meat consumption, can go a long way.