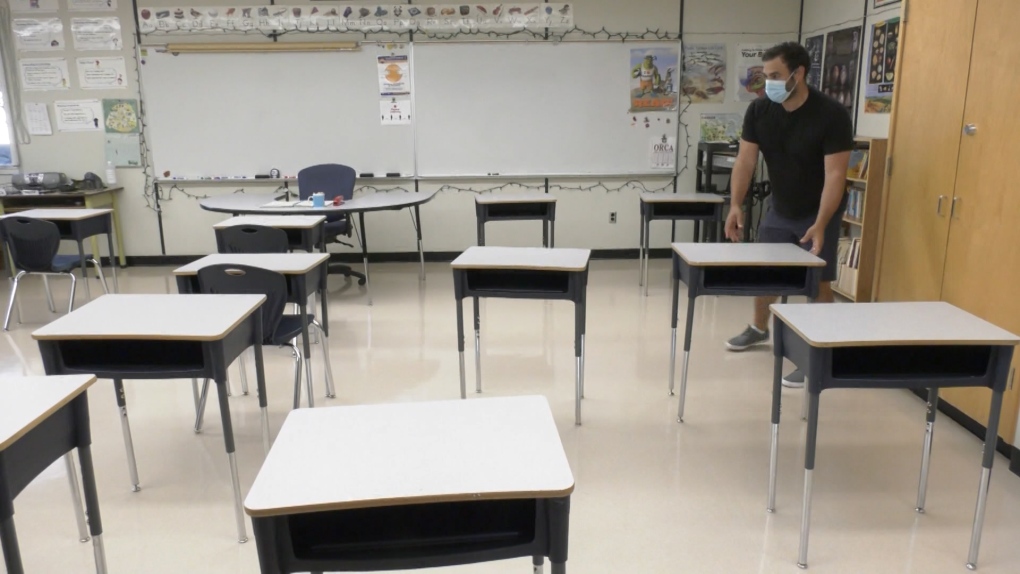 A classroom with desks spread out in Surrey, B.C.

VANCOUVER -- Parents keeping their children home from schools that offer limited or no remote learning options are concerned spots in speciality programs could be lost unless the British Columbia government takes action.

Students will be back at school Thursday but some will not return because of their own or a family member's health or general fears about contracting COVID-19.

Theresia Reid said her daughter Sydney was excited to start her first year at a new arts and technology program at a middle school in Chilliwack but needs to stay home to protect her father.

Chris Reid is in remission from testicular cancer that spread to his kidneys and lungs. So Sydney, entering Grade 7, and her high school siblings can't go to class.

“My kids didn't go back to school in June, they stayed home and we were led to expect that that's how it would be in September, with a hybrid model,” Theresia Reid said about a mix of in-class and online learning, which is being offered at some schools in B.C.

“I think there should have been, from the beginning, more online options. And not the fear of losing places.”

Reid said that before a temporary five-week remote learning option was offered, parents were told they could enrol their children in home schooling or distributed learning, which involves online instruction with students being connected to a teacher in a district, not their school.

“They are overwhelmed with inquiries. No one's contacted me back after my inquiry,” she said, adding Sydney would have lost her spot in the arts and technology program if she'd been registered in either program.

The principal at Sydney's school told Reid late last week that the temporary option could be extended, but the family is still awaiting details on what that could mean, she said.

Reid's older children, Danica in Grade 11 and Aiden in Grade 9, are autistic and their school is also offering a similar temporary online option.

Her husband may be forced to move to Kamloops to live with his parents if their children have to return to class, Reid said.

The province left parents scrambling to deal with principals over the summer instead of taking families' needs into consideration and allowing their kids to continue remote learning that was already in place at the end of the last school year, she said.

A one-size-fits-all approach of in-class learning promoted by the Education Ministry is unworkable, she said.

“It just feels like all the eggs were put in one basket. And there need to be multiple baskets. I feel really badly for the principals. They're the ones making all these phone calls to the parents, and their hands are tied.”

Education Minister Rob Fleming said districts are making efforts to meet families' needs based on their responses to a survey.

“As long as I'm seeing districts, and this is what I am seeing, being compassionate and supportive and trying to keep kids and their families connected to schools that's what we expect,” Fleming said late last week.

Amy Cochand said her daughters in Grades 6 and 10 are registered in French immersion at schools with only in-class instruction.

“French immersion's a big deal,” she said, adding her older daughter started the program in kindergarten.

“Ten years of schooling in French and to lose it now would be ridiculous.”

Cochand said her family has worked hard to keep their contacts to a small number of people but having their kids in larger groups at school poses too much of a health risk as COVID-19 cases rise in B.C.

So-called learning groups or cohorts at elementary and middle schools are capped at 60 people while high schools can include up to 120 students based on guidance from the provincial health officer.

The principal at her younger daughter's school has said distributed learning is the only option for students that will not be in school full time, Cochand said.

“But she can't be in French immersion if she does that, so she would lose her spot.”

B.C. Teachers Federation president Teri Mooring said parents who have the skills to advocate for their children were left to phone principals, and superintendents in some cases, to make “special deals for themselves.”

“The province completely abdicated its responsibility when it just sort of let school districts decide what they were going to do,” Mooring said, adding that created inequities in the public school system.

“What we are advocating for is that the space be protected and a teacher teaches those children that are learning remotely. That allows that child to remain connected to their school.”

Mooring said that would require the province to hire more teachers.

“We learned in the spring that teachers teaching in class and teaching remotely does not work. It adds to their workload to a degree that is not OK.”

This report by The Canadian Press was first published Sept. 10, 2020.