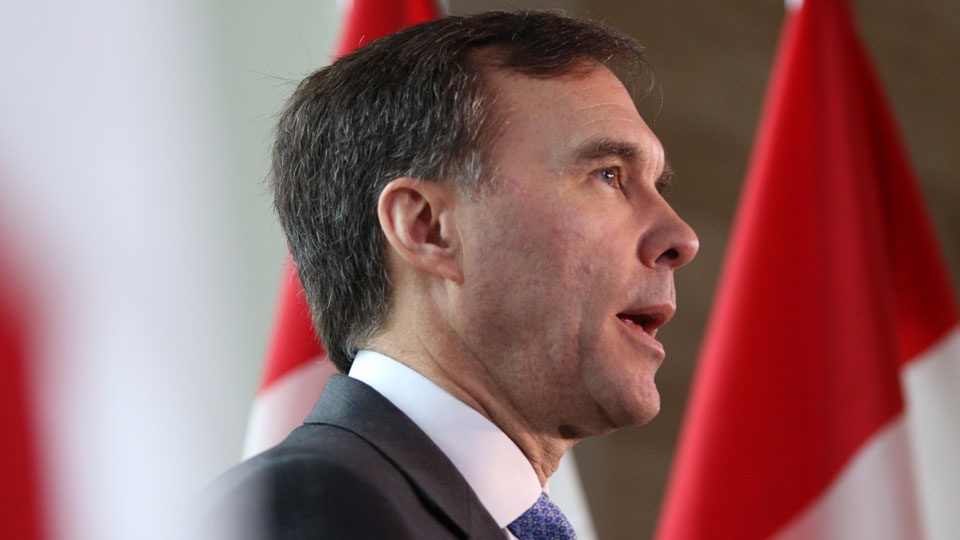 Federal Finance Minister Bill Morneau takes questions from the media during an announcement for Freedom Mobile at a press conference at the Delta Ocean Pointe in Victoria, B.C., on Friday, February 8, 2019. THE CANADIAN PRESS/Chad Hipolito

VICTORIA - Money laundering in British Columbia has become a top issue for the federal and provincial governments with federal Finance Minister Bill Morneau vowing a “crack down” Friday, while the province considers a public inquiry.

“The importance of dealing with money laundering concerns is something that is clearly on our agenda,” said Morneau at a news conference in Victoria. “We need to be very clear, we crack down on any issues around money laundering.”

Last year, an international anti-money laundering organization said in a report that up to $1 billion annually was being filtered through some B.C. casinos by organized crime groups.

The B.C. government also cited an RCMP intelligence report that estimated up to $1 billion from the proceeds of crime was used to purchase expensive Metro Vancouver homes. An RCMP official said Friday the Mounties are searching their data bases to find the report the government has cited.

“I've seen a real shift in the interest from the federal government on this issue,” Eby said.

Two B.C. government money laundering reviews are underway and are due in March. One probe will look to identify and close regulatory gaps that could be used by money launderers in the real estate and financial services sectors.

The second review will focus on identifying the scale and scope of illicit activity in the real estate market and whether money laundering is linked to horse racing and the sale of luxury vehicles.

“The premier hasn't ruled out a public inquiry,” said Eby. “He is actively monitoring the situation and I'm doing my best to keep him and cabinet informed on this quick-moving file.”

“We worry more broadly with issues like terrorist financing, which is what the global community is looking at when they think about money laundering,” he said.

But Eby said many in the global community are looking at B.C. as a jurisdiction where money laundering by organized crime has flourished.

“To some extent international concern is focusing on what's happening in B.C.,” he said. “We really need the feds on board here.”

He said it's difficult to fully determine the extent of money laundering in B.C., other than to conclude the numbers are increasing.

“It's really important that whether it's $100 million, or a billion dollars, or $2 billion, whatever it ends up being, that the issue and the need to address it remains the same and ... it is only growing in urgency,” Eby said.