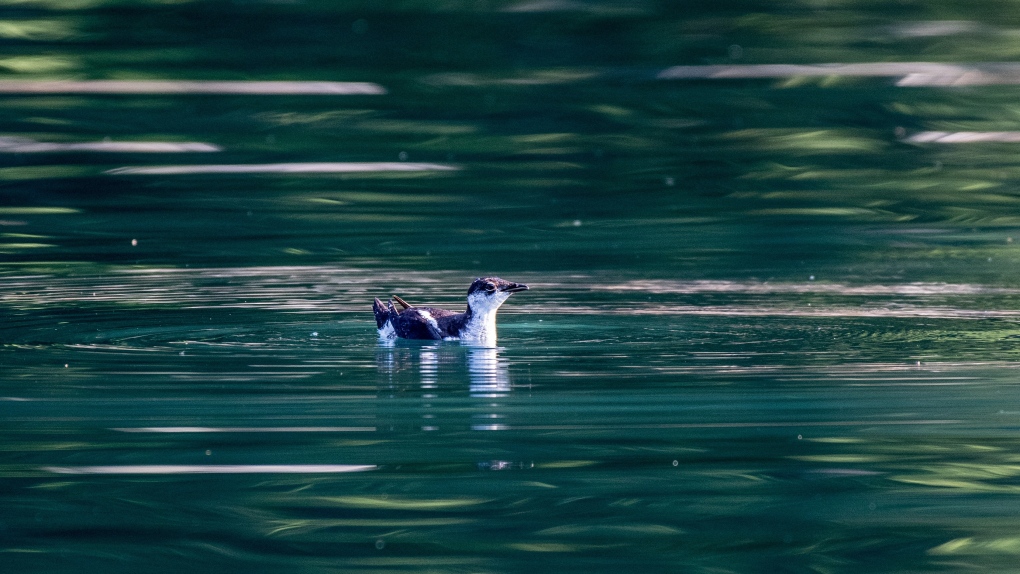 A marbled murrelet is seen in an image from Shutterstock.com.

Officials in Ottawa are failing to protect Canada's at-risk migratory birds, according to several groups behind a lawsuit directed at the federal government.

The suit claims that the Ministry of Environment and Climate Change needs to do more to protect the habitats of certain species, Vancouver-based firm Ecojustice said in a statement Thursday.

Filed on behalf of the environmental advocacy groups Sierra Club B.C. and Wilderness Committee, the suit alleges Minister Steven Guilbeault is "failing to meet his statutory duties" to ensure these habitats are protected.

They say the suit follows a statement the minister made that the groups believe "relies on an overly narrow interpretation of the federal Species At Risk Act," which limits habitat protection for some species of migratory birds.

As an example, the plaintiffs used the marbled murrelet, a seabird that relies on coastal old-growth forests in B.C. The logging of these forests have been the subject of protests across the province for months.

The group took issue with a protection statement from the ministry issued last month explaining how the federal Migratory Birds Convention Act can be applied to protect the habitats of some species.

The statement explains that the critical habitats of species that are protected migratory birds under the MBCA and by a section of the Species At Risk Act are protected by federal law.

It applies only to birds under Schedule 1 of the SARA, which lists those considered endangered, threatened or extirpated – meaning, essentially, extinct in Canada, but may live in the wild elsewhere.

And the phrases "critical habitat" and "habitat to which that act applies" refer only to the birds' nests, not to the surrounding area.

So, as argued by the groups involved in the lawsuit, the bird's nest could be protected, if it falls into Schedule 1 of the SARA, but not the rest of the old-growth forest it uses for nesting.

The acts do not address other parts of the birds' habitats, the loss of which could prove fatal to the species over time.

The groups behind the lawsuit say the issue is that the SARA should be more broadly interpreted, and should be applied to protect critical habitats for "at least 25 at-risk migratory bird species, including the marbled murrelet."

A lawyer with Ecojustice called Guilbeault's a "dangerously narrow interpretation" of the government's duty to protect these species.

"This threatens the survival of vulnerable species…who face increasing threats of habitat loss from both natural and human-caused threats," Andhra Azevedo said in a statement.

"A robust interpretation of the act is essential to protect and restore vulnerable species and their habitats and hold those who damage habitat to account. In the face of the mounting biodiversity crisis, it is imperative the federal government protect critical forest habitat to support the recovery of at-risk species, including the marbled murrelet."

The Ministry of Environment and Climate Change Canada confirmed to CTV News via email that it was aware of the lawsuit, and would not comment specifically on the legal action because it is before the courts.

But a spokesperson did say the federal government is committed to protecting species through the SARA, and that it takes threats to their habitats very seriously. This includes old-growth forests.

"That's why we are in negotiations with B.C. on a nature agreement to better protect and restore habitat…improve ecosystem resilience and advance the recovery of species at risk," the Ministry of Environment and Climate Change said.

The ministry noted a $55.1-million commitment in the most recent federal budget for a B.C. Old Growth Nature Fund, in collaboration with other groups, which is dependent on the provincial government making a matching investment.

"The province of British Columbia has the primary responsibility for the management of habitat for the species on non-federal land."

And the ministry said a federal recovery strategy specific to the marbled murrelet was added to the Species At Risk Public Registry 12 years ago.

Ahead of the lawsuit, and about a week before the protection statement at issue was released, Guilbeault announced $1,181,079 in funding for B.C. to ensure that those who commit environmental infractions are fined, money from which goes on to support conservation efforts.

Fines are collected from "bad environmental actors," as Guilbeault said, who fall under 14 federal legislative clauses including the MBCA.

According to the federal government, most Canadian species are protected under that act, including ducks, cranes, robins, herons, gulls and loons.

Birds including grouse, quail, pheasants, ptarmigan, hawks, owls, eagles, falcons, cormorants, pelicans, kingfishers and some others are not protected by the act, but some, such as barn owls, are protected by the SARA.

Canadian provinces have their own wildlife acts that may include some of these types of birds.