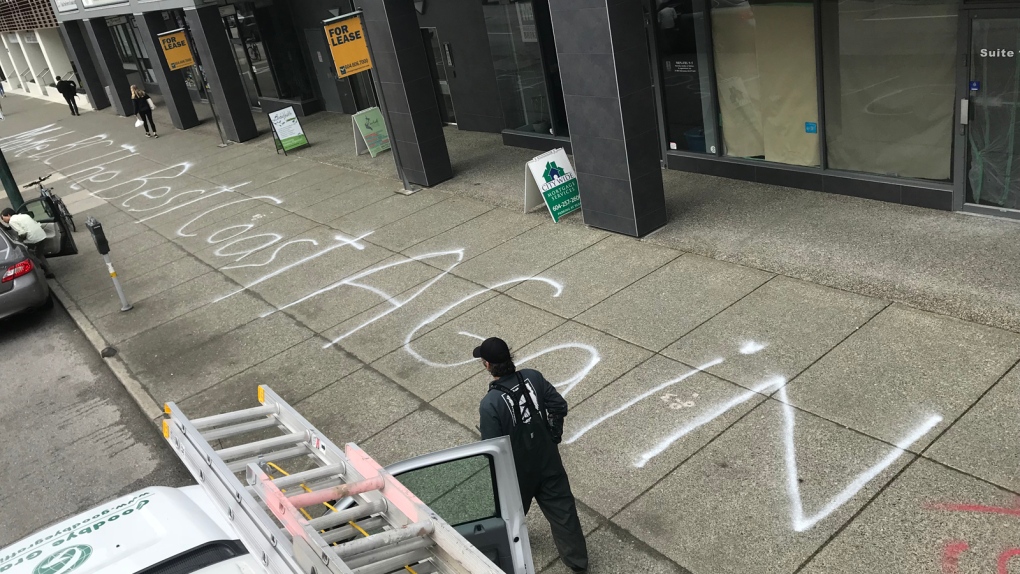 Jody Wilson-Raybould took to Twitter Monday to denounce the anti-Justin Trudeau graffiti that was spray-painted on the sidewalk outside her Vancouver constituency office.

Images from the scene showed messages scrawled in red and white across the sidewalk and street reading messages such as "Let Jody speak," "Make Canada great again" and "Trudeau for treason."

Vancouver police have arrested a 37-year-old man in connection with the graffiti.

The former minister and MP for Vancouver Granville later discouraged such actions on social media.

"While I appreciate people wanting to show their support and enthusiasm as well as express their views, I would encourage them to do so without damaging private or public property or putting themselves in harm's way," she said in a tweet.

The incident comes just days after Wilson-Raybould and Jane Philpott, who was also a cabinet minister, were kicked out of the Liberal caucus as the party deals with ongoing fallout from the SNC-Lavalin affair.

Trudeau cited a lack of trust in his leadership for the decision, telling reporters last Tuesday that "the trust that previously existed between these two individuals and our team has been broken."

Wilson-Raybould was attorney general until being shuffled out of the role in January. Allegations emerged weeks later that she faced pressure from the Prime Minister's Office to intervene in the criminal prosecution of SNC-Lavalin – triggering a scandal that has shaken federal politics to its core.

The former minister delivered damaging testimony supporting and expanding on those reports to the House of Commons Justice Committee. A recorded call between Wilson-Raybould and Privy Council clerk Michael Wernick later became public.

Despite the controversy, she had sent a letter to caucus imploring party members to let her remain in the party, and insisting she still "fundamentally" believes the prime minister shares her vision for the country.

Philpott had no part in the secret recording, but resigned as president of the Treasury Board in March citing concerns about Wilson-Raybould's allegations.