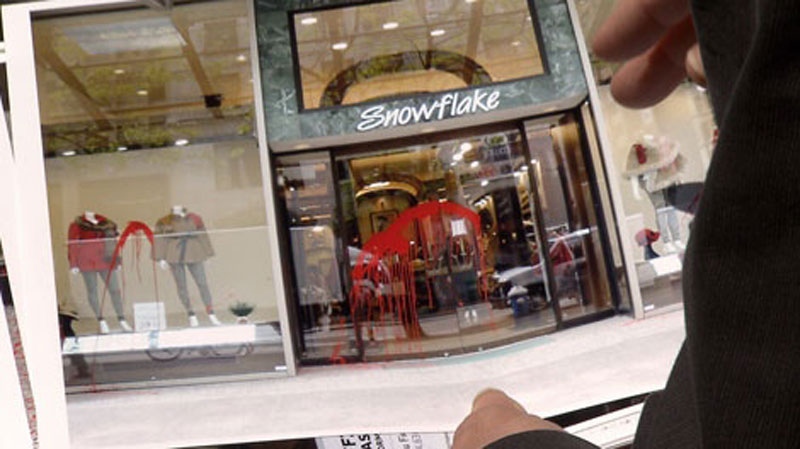 An animal rights extremist group has claimed responsibility for an apparently unsuccessful attack on a Vancouver police cruiser over the weekend.

The group claimed the cruiser was parked at the home of Megan Halprin, who co-owns the Snowflake fur store in the city’s downtown.

“The increased police presence will not stop our graceful and successful attacks. Make no mistake, this is a war. This is a fur war. This is a class war. The elite and the police are the enemy and will be treated as such,” the ALF statement read.

“There was one thrown on the street, but there was no damage to anything,” he said.

Montague said investigators are currently looking into the attack.

Both Halprin’s home and business have been the target of numerous attacks and vandalism in recent years.

Last May, her store was among four Vancouver-area fur shops splashed with red paint by vandals, and Halprin told CTV News her home had been involved in even more troubling attacks.

“They’ve targeted my house with red paint, with black paint, with bleach, with rotten meat, with messages. I mean they’ve gone all out,” Halprin said in May.

The repeated harassment eventually led her to post a sign on her front lawn declaring that the right to free speech does not include trespassing and vandalism.

The ALF states that it is utilizing “economic sabotage” to stop what it describes as needless animal suffering. The group claims that fur-bearing animals are kept in cages for life and subjected to unnecessary stress and suffering as a result.

Proponents insist the modern fur industry is not inhumane, but heavily regulated, despite the existence of some rogue harvesters.