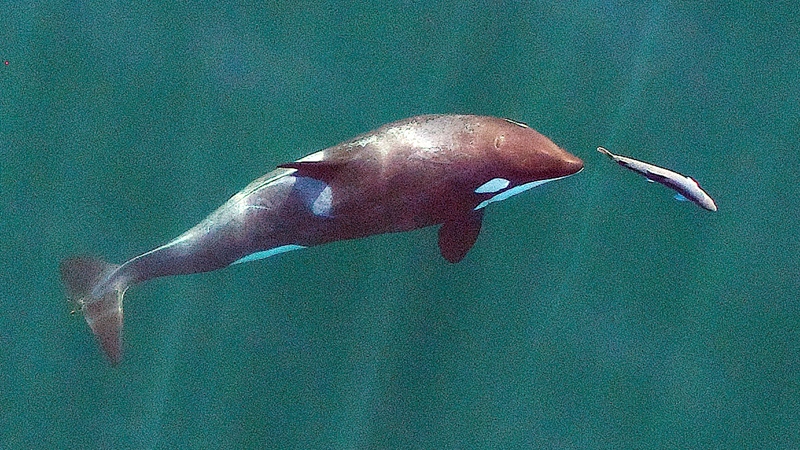 In this Sept. 2017, photo made with a drone, a young resident killer whale chases a chinook salmon in the Salish Sea near San Juan Island, Wash. (John Durban/NOAA Fisheries/Southwest Fisheries Science Center via AP)

VANCOUVER -- Several conservation groups say the federal government's failure to issue an emergency order reducing threats to endangered orcas off the B.C. coast ahead of fishing and whale-watching season could mean the species' extinction.

The organizations say Fisheries Minister Dominic LeBlanc and Environment Minister Catherine McKenna did not recommend an emergency order to cabinet by March 1, which could have seen priority feeding refuges established, fishing restricted and speed reductions for commercial vessels put in place for the season.

"Their time is running out and we're looking for concrete action to reduce threats, not just promises and not just more research," said Misty MacDuffee, wild salmon program director for the Raincoast Conservation Foundation.

MacDuffee said Friday the situation is critical for the remaining 76 southern resident killer whales, adding that they have up to a 50 per cent chance of disappearing in the next century. The population has declined from a high of 96 in 1993.

She gave the mapping of potential foraging refuges as an example of an action that is useless without also keeping recreational fishermen and whale watchers out of those zones.

"They can't just create a map and say, 'Here are the areas that are important, these are the key areas,' and then not do anything to reduce the threats that are occurring in those areas," MacDuffee said.

Department of Fisheries and Oceans spokesman Vincent Hughes said the ministry is reviewing the petition and takes orca protection seriously.

The ministry is already doing several things to reduce threats to the species, he said, including spending $7.2 million on digital hydrophone and oceanographic technologies to monitor underwater noise.

It's also working with the Vancouver Fraser Port Authority to conduct trial vessel slowdowns in the Haro Strait. On Friday, the Port of Vancouver said early results confirmed that commercial vessels participating in the trial produced less noise when they slowed down.

The ministry has also proposed fishing closures to reduce competition for chinook on a trial basis in four areas, including the mouth of the Fraser River, the west side of Pender Island, the south side of Saturna Island and in part of the Strait of Juan de Fuca. The trial is proposed for May to September, to coincide with the orcas' expected foraging, according to a Feb. 15 discussion paper.

Last month, a report was released reviewing the effectiveness of recovery efforts so far. In it, the department identified priorities similar to those expressed in the groups' petition.

The report found that while some initiatives, like banning contaminants, have slowed the species' disappearance, they are not enough. No concrete measures are in effect that directly aim to reduce ship noise and improve prey availability, which would provide the best chance of positive progress in the near term, it said.

Focusing on the orcas' key foraging areas either by increasing the abundance of prey or reducing underwater noise so they can forage better is "critical," the report said. It also identified ship strikes as a new threat to the species.

The species is on a trajectory to disappear, unless further efforts are taken, the report said.

Research biologist Linda Nichol, who is one of the report's authors, said addressing some of the threats to southern resident killer whales requires co-operation with the United States, as well as participation from many stakeholders -- including the shipping industry, whale-watching industry and both commercial and sport fishermen.

"The types of management things we might want to try and look at to reduce noise and disturbance, increase prey availability for these animals, could influence different sectors of our society on both sides of the border," Nichol said.