10-month-old orca calf will not survive after mother's death

A 10-month-old orca that still needs its mother's milk is not expected to survive now that its mother has died, an expert says.

The baby – known as J54, or Dipper – was born to his mother J28 (also known as Polaris) in December.

J54 was born at the tail end of a baby boom for a group of three orca pods known as the Southern Resident killer whales, the only orca population listed as endangered. The population typically travels along the west coast between Oregon and Vancouver Island.

The male seemed to be doing well, but a short time after his birth, his mother's health took a turn. Her deterioration may have been due to birth complications, but her body has not been found so scientists have been unable to confirm a cause of death.

J28 was seen looking ill in January, and was "clearly emaciated" by the July, according to Kenneth Balcomb, a senior scientist with the Center for Whale Research in Washington State.

Balcomb has been closely monitoring the whale population since the 1970s, when he completed the first census of the Southern Resident orcas. He's been tracking their movement, births and deaths ever since. 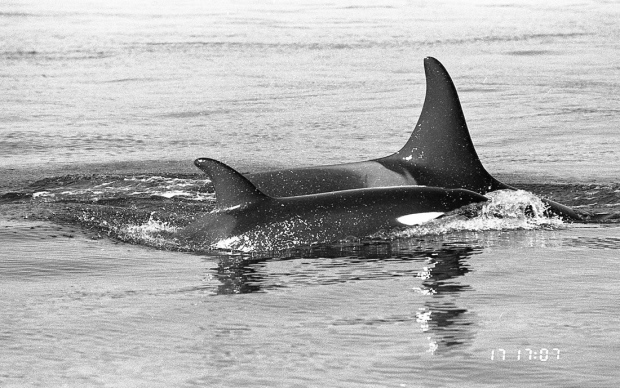 Her absence was noted within a few days. J28 was born in late 1992 or early 1993 in Puget Sound. She was injured when she was 10 years old, leaving an easily recognizable nick in her dorsal fin.

J28 had her first known calf in 2009, at the age of 16, Balcomb said. The calf was named J46, or Star. Another newborn calf was found dead four years later, and DNA tests confirmed she was its mother.

Her third known calf, J54, was born in December.

"Regrettably, now that Mother has died, he will not survive, and he in fact probably is already dead, along with two other of the boomers, J55 and L120," Balcomb said.

In her mother's absence, J28's first-born has been seen trying to care for the young calf. The young female, known as J46, has been seen catching salmon and offering them to the baby.

But the baby still needs its mother's milk, and no other lactating whales have adopted the calf.

Balcomb said J46 was also seen trying to feed her mother, in the months before she died: "She's trying, but she can't work hard enough and catch enough to feed three whales." 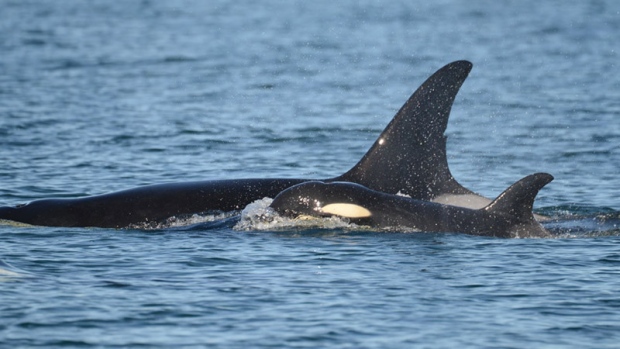 The scientist said that the family's sad story is just one of many. Reproductive issues have been noted in the Southern Resident population, with a miscarriage rate of more than 50 per cent.

Young mothers are dying faster than they are being replaced by maturing adults, so the population isn't being replenished.

Balcomb said the population of Southern Resident killer whales was 100 in 1995. The most recent numbers suggest that it has fallen to 80 in the years since.

"We have seen virtually no growth in this population in 20 years in spite of large amounts of money spent to study and 'recover' them," Balcomb said.

Early calculations suggest that 43 per cent of calves die before reaching six months, he said, but survival is better in some years and worse in others. Calves aged six months to five years have a 76 per cent survival rate.

Balcomb said some of the issues facing the whales have nothing to do with humans, but that people have "drastically altered" the availability of a main food source: Chinook salmon.

In addition to changes in salmon populations, contaminants in the whales' ecosystems can be accumulated in their blubber.

When there isn't enough to eat, whales burn off some of their blubber to provide energy.

"Their own blubber is not actually toxic to them, and when metabolized and circulated in the blood stream it causes reproductive malfunction, immune-suppression and nervous system impairment," Balcomb said.

He said the trend will continue until the population of Chinook increases dramatically.

He said the deaths are a sign of what some experts have known for years, that the whales are not as healthy as they should be.

"We know the reasons why and we're hoping to evoke change," he told CTV News.

"Hopefully this is a bit of a wakeup call and the message gets out there that government really needs to start doing something."

A spokesperson from Fisheries and Oceans Canada said the government is studying the whales to find out where they feed, so they can see which stocks are most important. 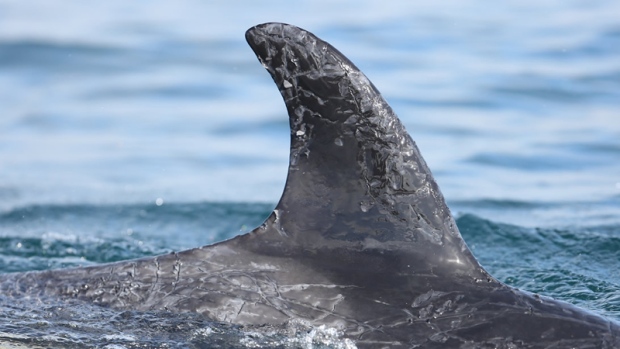 J54's back shows 'tooth rakes' from his sister, who was trying to help him surface. (Kenneth Balcomb)