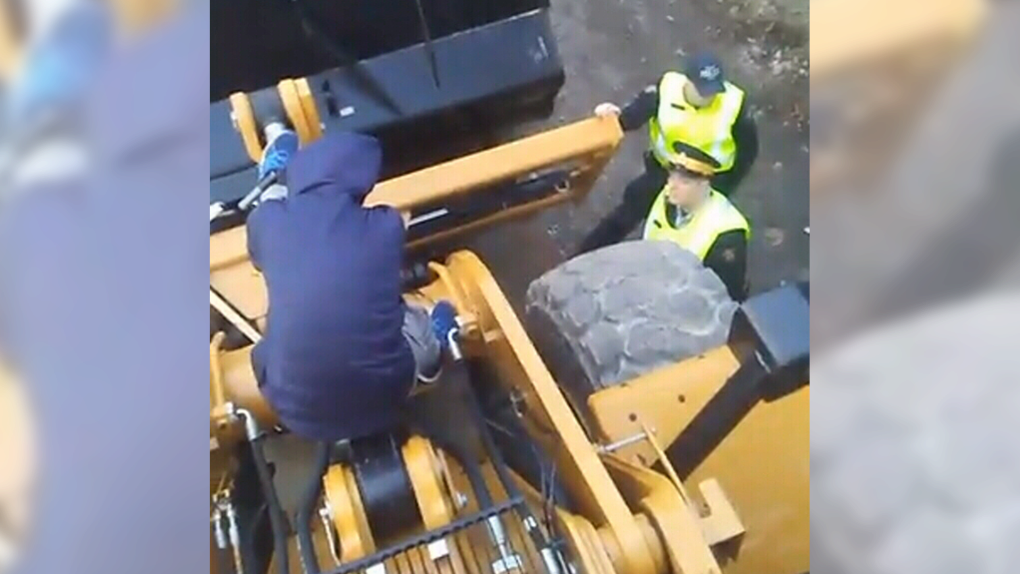 An image from video posted to Facebook by user Uni Urchin shows a demonstrator on top of an excavator at the Kinder Morgan site in Burnaby Monday, March 19, 2018.

Dozens of demonstrators were arrested and three police officers were injured during protests at the Kinder Morgan site in Burnaby this week.

Mounties said at least a dozen people were arrested on Shellmont Street Tuesday, many of whom had breached a court-ordered injunction involving the Trans Mountain facility.

Those demonstrators were given copies of the injunction issued by the B.C. Supreme Court, which states they cannot obstruct, impede or otherwise prevent access to the site. Police said they were given the option to leave or face arrest, and after being asked to leave a number of times, they were arrested.

All were released Tuesday afternoon and will appear in court in the coming weeks, Burnaby RCMP said.

The arrests came a day after 19 people were arrested at a similar protest, 13 of whom had breached the injunction.

One male protester was arrested after locking himself to the front of an excavator being transported on the back of a truck. He was extracted from the lock and held in civil contempt of a court ordered injunction.

A woman was arrested after climbing on top of the same excavator and refusing to come down. She eventually did climb down after what RCMP described as "hours of negotiation."

She is alleged to have resisted arrest, but was taken into custody safely, and is being held in contempt of a court order. An investigation into her other actions is ongoing, police said, but they did not provide details.

A male protester was arrested for obstruction, but released after agreeing to keep the peace while continuing a lawful protest. Another was arrested after breaching an injunction stating that demonstrators cannot come within five metres of the site.

"This male put himself and responding police officers at risk of serious injury after he climbed a tree at Westridge Marine Terminal," Mounties said in a statement.

"This male was safely taken down from the tree with the assistance of the Lower Mainland Integrated Emergency Response Team."

During Monday's arrests, three officers suffered minor injuries. One was kicked in the head, police said, while the others suffered injuries to their knee and hand.

And 28 people were taken into police custody during a protest on Saturday.

Several of the demonstrators arrested Saturday had breached a court-ordered injunction that they not prevent access to the site.

Some told reporters that day that they knew they risked arrest, but that they were determined to prevent the Texas-based energy corporation from meeting an approaching construction deadline.

Kinder Morgan has been logging trees at the terminal in effort to make way for the Trans Mountain pipeline expansion. Crews were given until March 26 to try to get the work done before migratory birds arrive in the area, putting the work on hold until the animals move on in August.

In a statement Tuesday, Mounties said they are using a measured approach when dealing with demonstrators, ensuring that they retain the right to peaceful protest.

"In this instance, a group of demonstrators made a decision to protest unlawfully," Supt. Chuck McDonald said.

"Our officers on scene dealt with an unfolding situation professionally and took action to ensure the safety of all involved."

The RCMP said demonstrators have a right to lawfully protest, but that companies have a right to complete their work. Officers' priorities are for public and police safety, as well as protecting protesters' rights to freedom of expression, association and mobility, they said.