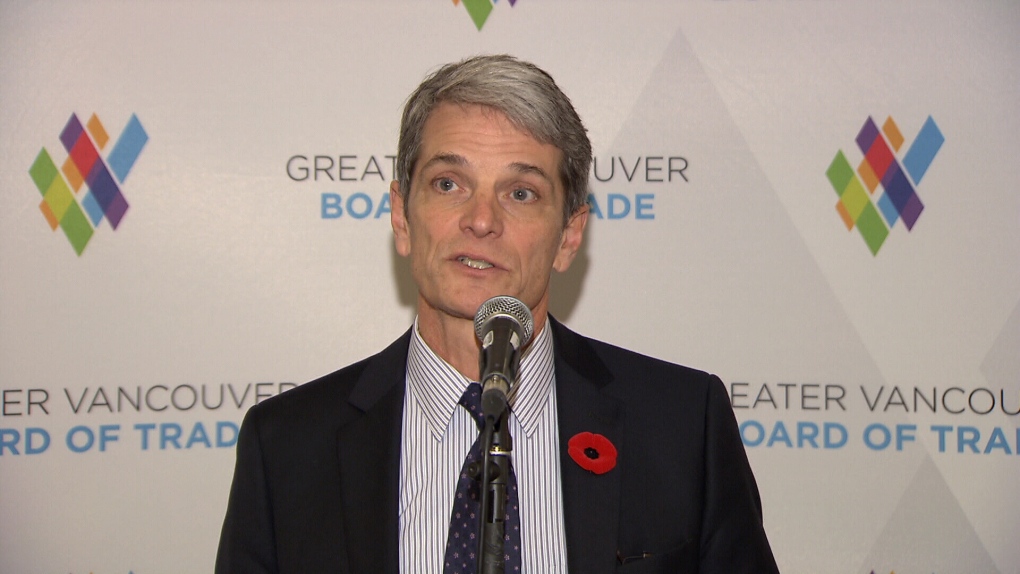 TransLink CEO Kevin Desmond speaks at the Greater Vancouver Board of Trade.

TransLink is defending the approval of higher pay ranges for its executives after the move was criticized the Canadian Taxpayers Federation.

"These TransLink salaries could spiral out of control, based on these newly approved ranges," said Kris Sims, the B.C. director of the Canadian Taxpayers Federation. "The CEO could get a 26 per cent pay hike all while TransLink taxes are being jacked up."

Desmond's new maximum salary would be some $160,000 than what Prime Minister Justin Trudeau is paid and more than twice what B.C. Premier John Horgan makes.

“Why are the people who are running a regional bus board in Metro Vancouver getting paid more than the prime minister of a G7 country, the premier of our province, and potentially soon more than the head of New York City’s transit system?" Sims said.

The new salary plan, which was approved July 25, also opens up the possibility for a large raise for the company's chief financial officer, a position that made $307,688 without pension last year. Under the new plan, the CFO could be paid as much as $372,513.

The same $372,000 salary limit has been placed on the president and general manager of the Coast Mountain Bus Company and BC Rapid Transit, a position that earned nearly $328,000 without pension in 2018.

In a statement, the CTF criticized TransLink for adding to the burden of average Metro Vancouverites who are already facing a rising cost of living.

"Average working people, commuters and property taxpayers in Metro Vancouver are footing the bills for these huge salaries and they have no say in the matter," said Sims. "These CEOs never need to face a voter; they rarely see turnover around their boardroom table, and yet their salaries are still paid by taxpayers and commuters – we need more common sense and accountability."

The federation cited the 18.5 cents per litre TransLink tax paid by drivers in the region, adding the tax could amount to more than $1,000 a year for a two-car family living in Langley.

But the transit authority said the new salary ranges are necessary for attracting and retaining the kind of talent capable of successfully running an operation of TransLink's scope and size.

"It's a big job. We have $10 billion in assets, 8,000 employees (and) a massive capital program over $10 billion," TransLink board chair Tony Gugliotta told CTV News Thursday. "We need really strong and effective leaders to manage that because … we're managing taxpayers' money. We want to be prudent in how we do that."

The compensation plan, which was prepared Western Compensation & Benefits Consultants, looked at the salaries of nine other transportation organizations in Canada compared to their size and range of services.

"Larger organizations have larger revenues, a larger asset base, more employees, etc. These factors increase the job size and responsibilities associated with executive positions," the report read, adding that "TransLink Enterprise provides a broader range of services than any of the transportation comparator organizations."

WCBC said the objectives laid out in the report also took into account the recent approval of $10 billion in new transit funding as part of the 10-Year Vision for Metro Vancouver Transit and Transportation.

"Leadership stability is critical to achievement of the organization's deliverables and changes in key leadership could delay or jeopardize the delivery of the 10-Year Vision and increase the cost of fulfilling it," the document read.

Gugliotta said a freeze in executive compensation in the past four of six years has made those leaders harder to find. He cited the departure of Vivienne King, the president of BC Rapid Transit—which falls under TransLink—saying TransLink struggled to find her replacement because candidates turned the job down over money.

Ultimately, Gugliotta said TransLink has to look not at what the prime minister or premier make, but what other transit executives earn.

Some make less than Desmond's new salary cap, including the Toronto Transit Commission CEO. A June 2018 job posting following the departure of former CEO Andy Byford was limited to a maximum of $356,000 per year.

On the other hand, compensation for the BC Ferries CEO is capped at $582,000. Gugliotta also cited the CEO of Toronto-area transit service Metrolinx who makes upwards of $500,000.

"The salary for Kevin (Desmond) is sort of in the middle of the pack," Gugliotta said.

The latest executive compensation plan is TransLink's first since 2015. Importantly, preparation of the report did not involve any TransLink staff so as to avoid any conflicts of interest.

The report said the plan will continue to be reviewed every four years, with the next review beginning in January 2023.

The full plan follows. Viewing this on our mobile beta site? Tap here for a compatible version.