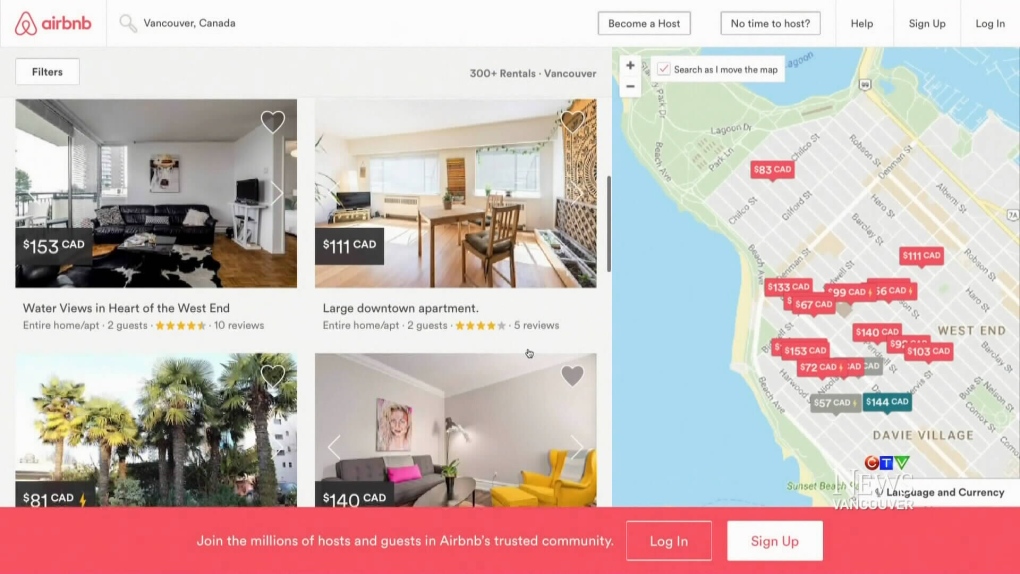 Airbnb listings are seen in Vancouver.

Hundreds of listings were either converted to long-term rentals or pulled from short-term rental sites in the first month of Vancouver's new regulations.

Since the new guidelines came into effect April 19, nearly 400 listings on sites such as Airbnb have either been made available to residents of the city or deleted entirely.

Operators of 89 listings are being prosecuted, with the potential to collect as much as $890,000 in fines, the city said Thursday.

More than 400 listings have been subjected to some type of enforcement, ranging from warning letters to prosecution, and more than 100 are being audited for incorrect or duplicate business licences.

In addition, the city is investigating more than 1,500 other listings that appear to be illegal, including commercial operations and units that may be unsafe. Staff members are following up on more than 430 citizen complaints made within the first month, all of which are reviewed and actioned when appropriate.

At the same time, more than 900 short-term rental business licences have been issued to 679 owners and 244 renters.

Under the new guidelines, meant to free up units that could be rented to those looking for homes in a city with a near-zero vacancy rate, all hosts must apply for a business licence. They are also required to pay taxes collected by Airbnb, in addition to the cost of their licence.

Successful applicants are those who only rent out spaces that are part of their primary residence, where they live more than 180 days a year and receive mail. They are permitted to rent short-term while on vacation, for example, or can list a bedroom inside their family home, but must find long-term tenants if they wish to rent out a full home or a separate suite.

The city encourages anyone who suspects a property is being rented illegally to report it through 311 or the VanConnect app.

To help the city's enforcement team, Airbnb has agreed to provide the city a list of all licences and addresses that use their platform each quarter. The city is also using a program that assesses activity in the Vancouver market.

Those who were already operating a short-term rental when the rules came into effect have until Aug. 31 to obtain a licence. Anyone creating a new listing must already have a licence to operate it legally.