3 crashes on B.C. highways in less than 3 hours; 1 dead in Coquihalla collision 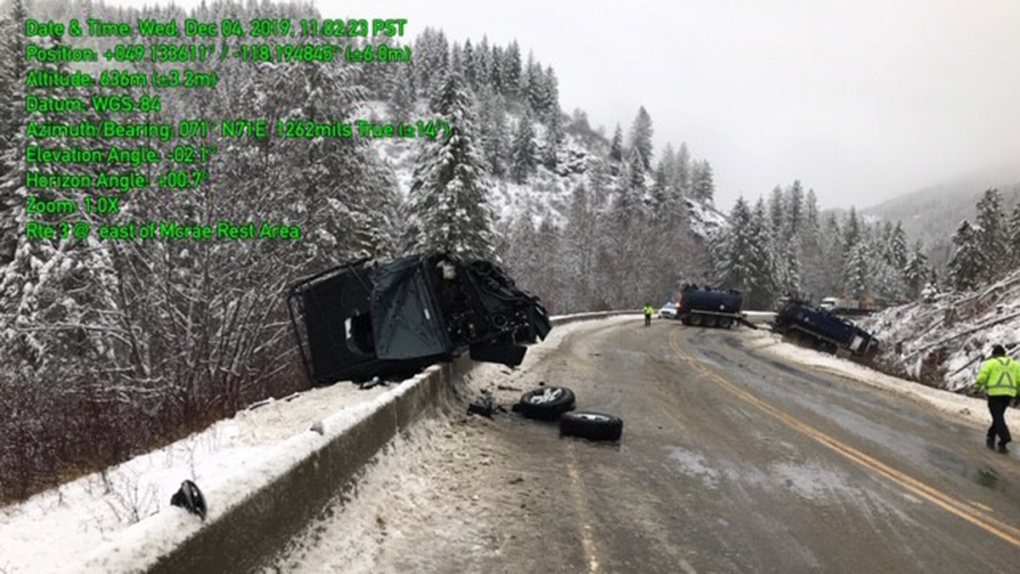 A photo from shows the scene of a tanker-involved crash on Wednesday, Dec. 4, 2019. (BC Ministry of Transportation and Infrastructure / Twitter)

VANCOUVER -- Dangerous conditions on two B.C. highways may have been a factor in multiple crashes Wednesday, including one fatal incident south of Merritt.

A BC Emergency Health Services spokesperson said the Coquihalla Highway "was in horrible shape" in some places in the morning hours.

She said the first crash was reported shortly before 7 a.m. on a section of Highway 5 in Kingsvale.

Three ambulances and two air ambulances were sent to the scene of a multi-vehicle crash. Two people were treated at the scene by paramedics.

One of them was then taken to hospital in critical condition.

A spokesperson from the BC Coroners Service later confirmed to CTV News that that person, believed to be a man in his 20s, has died of his injuries. The service will be attending the site of the investigation "once safe to do so," and will then look at how, where and when he died.

The other person hurt in the crash did not require hospitalization.

CTV has also reached out to the RCMP for more information on the fatality.

Another collision happened just south of the first about 40 minutes later. In that case, two ambulances were sent, but those involved in the crash did not need treatment in hospital.

Northbound lanes of Highway 5 were closed between Hope and Merritt following the crashes, and drivers were advised to use highways 1 or 3 to get around, or monitor the closure online.

The lanes reopened shortly before 12:30 p.m.

Five ambulances were sent to the scene and two patients were transported to hospital. One is in critical condition, BC EHS said, and will be flown to an acute care hospital by air ambulance.

The transportation ministry posted on Twitter that the Christina Lake crash closed the highway at McRae Road. Those who rely on the route were advised to expect delays, and monitor the situation on the DriveBC website.

There is no detour available for that stretch of highway, the site says.

A single lane was open to alternating traffic at around noon, and the highway was fully reopened shortly after 4 p.m.

A section of Highway 3 between Paulson Summit and Kootenay Pass was under a snowfall warning first issued at 4 a.m.

The weather agency warned of total snowfall accumulation of about 20 centimetres in some places, and advised drivers to adjust with changing road conditions.

"Visibility may be suddenly reduced at times in heavy snow. If visibility is reduced while driving, turn on your lights and maintain a safe following distance. Weather in the mountains can change suddenly resulting in hazardous driving conditions," the warning said.

At the same time, part of the Trans-Canada Highway was under a winter storm warning, which suggested up to 40 centimetres of snow could fall on part of the highway from Eagle Pass to Rogers Pass.

Check out this page for more information, including how to download. Send photos through the app and we might use them on air and on Instagram.