VANCOUVER -- When Lindsay McGill was dropping off some groceries at a friend’s house, there was no free parking available, so she quickly parked at a meter and ran up to the door.

“It was later in the evening, just before 9 p.m.,” she told CTV News in a Twitter message. “Stupidly I didn’t even think to throw 10 cents in the meter as I was going to be there for such a short time.”

On returning to her car, she found a ticket for $46.

McGill said she’s been trying to follow public health advice, so when she goes to do groceries or runs errands, she tries to save someone else a trip.

“I’ve been reaching out to friends ... to see if people need anything," she explained. "Better one person goes out than several.”

On March 20, when Vancouver announced sweeping closures to restaurants and playgrounds, city manager Sadhu Johnson suggested people wouldn't have to worry about parking tickets during the pandemic.

“We are moving away from non-essential work and that is one of the areas, so we won’t be enforcing the parking bylaw," Johnson said.

He went on to say staff would either be redeployed to other critical functions in the organization or sent home.

Despite that statement, Vancouverites have been tweeting photos that appear to show parking enforcement is continuing.

Why are we getting parking tickets during a pandemic? Dropped off essentials to help a friend and left my car for 4 min and @CityofVancouver gave me a $46 ticket. #COVID2019 How do you expect people to pay for this? #Vancouver @GlobalBC @CTVNews @CBCVancouver #covid19Canada

When McGill called the city about her ticket, she told CTV News, “the girl there told me she couldn’t do anything and I’d have to dispute it.”

The ticket comes at a time when many thousands of people are struggling to make ends meet, and rent payments are just around the corner.

“Under normal circumstances I would never even ask to get off this,” McGill said, but said "it sucked” given that she was trying to do the right thing during the COVID-19 crisis.

CTV News has reached out to the City of Vancouver for a response.

On Friday afternoon, McGill said a Good Samaritan saw her story and decided to pay her fine. McGill said she only spoke up so the city would consider using "their employees for better cause" during this difficult time, but that she was grateful for the generosity.

Update: The City of Vancouver responded Monday to criticism over parking enforcement. Read about the new policy. 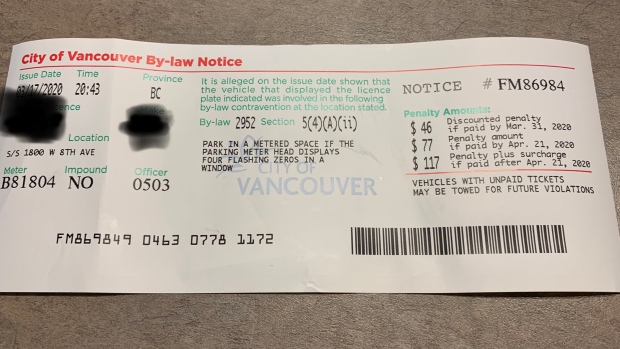 @kennedystewart During the current provincial State of Emergency, when members of the public have been asked to stay home....the City of Vancouver feels it’s “absolutely necessary” to give out parking tickets and potentially spread the virus. #COVIDー19 #Vancouver pic.twitter.com/Kt67NTfBun