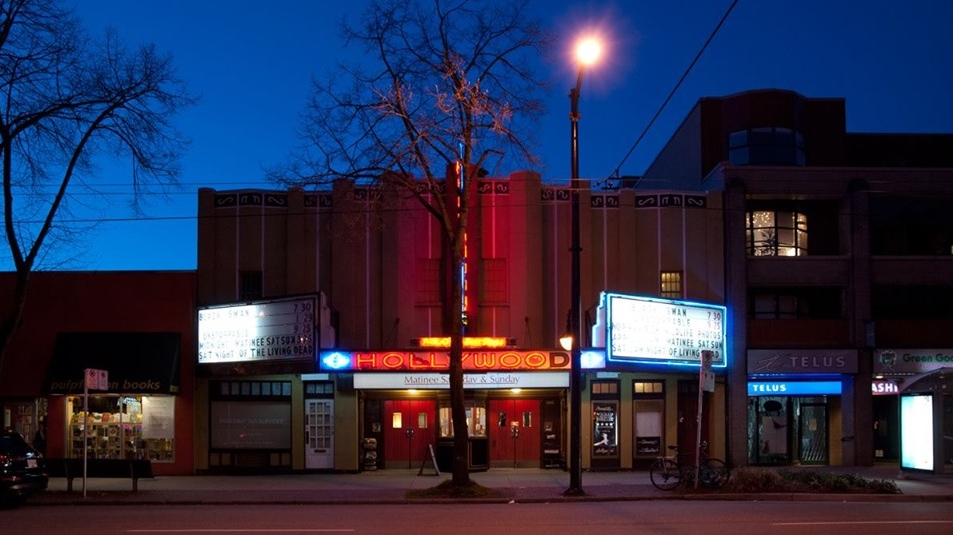 VANCOUVER - The Hollywood Theatre has sat empty on Vancouver's westside for years, but it could be moving closer to reopening, with city council set to consider a liquor license for the venue this week.

The single-screen theatre closed in 2011, ending 76 years of showing movies at the art-deco, single-screen venue at 3123 West Broadway. The first movie the Hollywood Theatre showed in 1935 was "Life Begins at 40," starring Will Rogers. The last movie shown in 2011 was "Cinema Paradiso," according to the Vancouver Heritage Foundation.

In 2018, Vancouver's city council voted to give the site's owner, Bonnis Developments, extra height and density for a planned new development, if the company would agree to keep the theatre.

The theatre's new operators are now one step closer to reopening as a performing arts venue. This week, Vancouver city council will consider whether to approve the venue's liquor licence.

The operators plan to hold a range of events at the theatre, including plays, stand-up comedy, musical performances and film screenings. The theatre will also be available for corporate, private and non-profit events.

The Hollywood Theatre hopes to be granted an extended hours licence, which would allow it to serve alcohol until 1 a.m. on Sunday through Thursday, and until 2 a.m. on Friday and Saturday. Alcohol will only be served during pre-booked events.

In 2014, Heritage Vancouver listed the Hollywood Theatre as the number one most-threatened heritage site in the city. The heritage preservation group was especially concerned the historic interior could disappear if the developer only "kept the façade."

"One by one, Vancouver’s historic movie theatres are closing, leading to the loss of beloved neighbourhood landmarks and cultural spaces," Heritage Vancouver warned in 2014. "We have lost many historic theatres in recent years, including the Varsity on 10th Avenue, the Imperial (1910) (last known as the Venus) on Main Street, the Van East Cinema on Commercial, the city’s oldest theatre, the Pantages (1908), The Fraser on Fraser Street, and most recently the Ridge Theatre (1949). We are now at risk of losing The Hollywood."

Opponents of the liquor licence were concerned about noise, parking and community safety, especially because the operator is asking for later hours, according to the city staff report.

But supporters "felt that a liquor licence would bring a greater scope of ages and interests together and would complement the diverse, multi-use programming proposed for the establishment, which is integral to the financial and economic viability of the theatre and neighbourhood."

East Vancouver's Rio Theatre was the first single-screen theatre in B.C. to fight for, and win, the ability to serve alcohol at adult-only events.