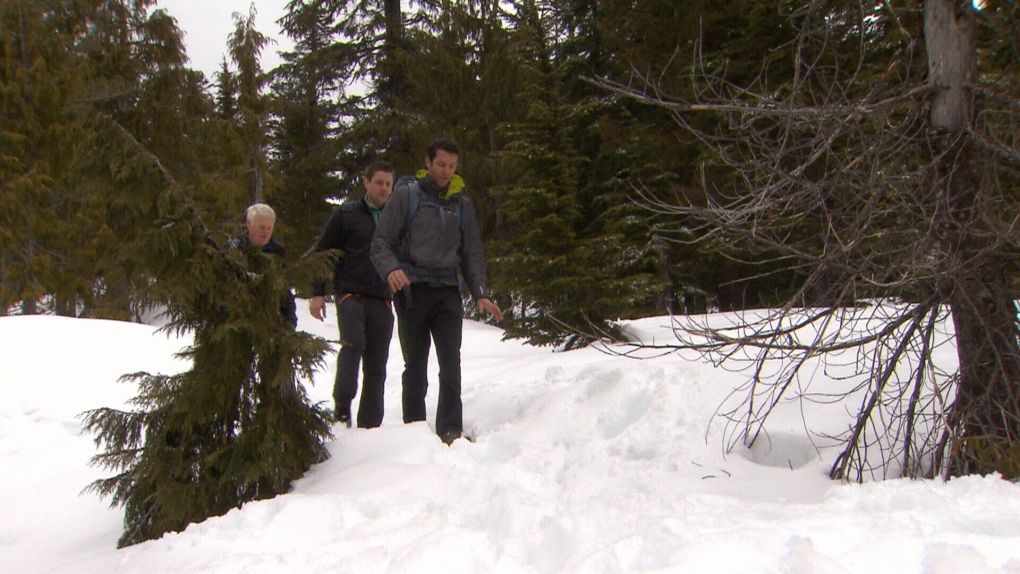 As the weather warms up in Metro Vancouver, rescuers on the North Shore are reminding hikers that winter weather is still in full swing in the mountains and those who don't show up prepared can quickly find themselves in life-threatening predicaments.

"As you get higher up, you get a lot more snow," said NSR team leader Mike Danks as he guided CTV Vancouver's Scott Hurst on a hike to show just how different conditions are at higher altitudes than in the city.

"The conditions can change really quickly depending on the temperatures," he said.

The North Shore mountains see metres of snowfall each year that often continues well into the spring, catching inexperienced visitors by surprise.

Snow can quickly accumulate to the point where it completely covers marked trails, making it difficult to stay on the right path.

"For people that are unfamiliar with the trails up here, it's really easy to get off-trail when there is no trail to follow, if you will," Danks said. "As soon as you're off the marked route, that’s when you get into terrain that you can get in trouble very quickly."

The snowy conditions can also lead to slips that, in some areas, can mean falling dozens of metres into trees and rocks below.

"It's a whole different ball game in the winter because the hazard's a lot higher," Danks said.

Despite constant warnings to the public, NSR continues to see a growing number of calls involving stranded or injured hikers, backcountry skiers and other outdoor enthusiasts who find themselves in trouble.

"Things are definitely increasing. We're doing our best with public education, but if you look around, there's just so many people that are getting out on the trails during all four seasons," Danks said. "This year alone—2018—this has been our busiest year to date."

In the first three months of the year, NSR is already averaging more than 10 calls a month.

According to Danks, call volumes have gone up 30 per cent over the past three years.

And while rescuers don't discourage anyone from heading into the mountains when it's snowy and cold, Danks said preparation is key.

"We always recommend that people do their research on the hike they're going to do and find out what the conditions are in that area," he said. "To be honest, it's all about preparation—making sure you're physically fit and that you're carrying the right equipment to be in that area. I think people can do a lot to help themselves."

Certain pieces of gear, he said, can make the difference between life and death if you're injured or lost in the cold.

He recommends that all hikers carry a GPS device that allows them to communicate with authorities. Extra layers of warm clothing can also significantly prolong the amount of time you can safely spend outdoors, especially if you're carrying GORE-TEX outer layers that will keep you dry.

The correct footwear can help prevent a fall, Danks said, and in some areas, micro-spikes or crampons could help provide a safer amount of traction.

Other essentials include at least a litre of water, gloves and flashlight or headlamp.

According to Danks, emergency blankets and hand warmers can help you survive outside for longer. A shovel can help stranded hikers dig a snow shelter and a whistle can help you alert rescuers or other hikers of your location.

Danks said those who don't do everything they can to stay safe are endangering themselves and rescuers who have to search for them in the event of an emergency.

The rescue process itself, Danks said, becomes much more complicated in cold weather because of the treacherous terrain and the amount of gear crews need to carry to ensure everyone's safety.

If you are stranded in the mountains, the first thing to do is alert someone if you have the means, and find shelter from the elements while you wait for help.

More information about backcountry safety is available on NSR's website.