Who is getting the virus, and what comes next? B.C.'s latest COVID-19 modelling data unveiled

VANCOUVER -- New modelling released by B.C. health officials about the state of the novel coronavirus pandemic shows virus rates are slowing down in the province.

The new data, released by Dr. Bonnie Henry Friday morning, also considers what next steps might be taken in the province's response.

"We are experiencing a slowing of our rate and we want that to continue," Henry said during a news conference. "We need that to continue for us to move to the next stage."

But in Friday's update, health officials said B.C.'s epidemic curve has been "well below projections based on the Italy and Hubei experience." As a result, using those two outbreaks are "less important" reference points for B.C.'s planning.

In B.C. hospitals, there is currently less than 50 per cent occupancy of total critical care beds. As well, the province has 681 ventilators ready in the health-care system with another 55 ready to be added. Those figures surpass the number that would be needed for the modelling based on Italy's outbreak, health officials explained. 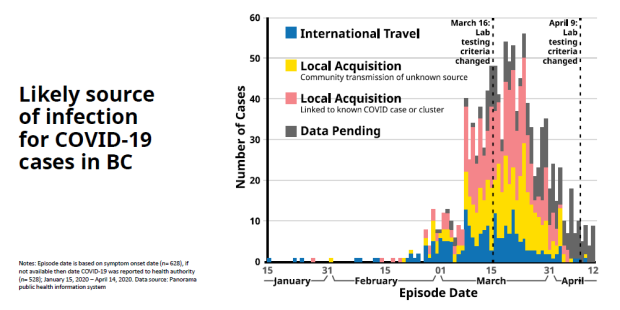 But health officials stressed the slowing infection rate is because of public health action, not because of herd immunity.

"This difference between what could have been and what has happened is because of the collective action of B.C. citizens," Henry said.

But reaching herd immunity is the only way things can eventually go back to normal, officials said, and the best way to achieve that will be through a vaccine. No one knows how long it could take for a vaccine to become available, however.

"We know that this pandemic won't be over until a significant portion of the world's population becomes immune to this new virus and that will not happen for some time," B.C. Health Minister Adrian Dix said.

"We are hopeful and supportive of efforts for a vaccine but they are going to take a while to develop."

Who is getting the virus?

"We've had one death in a person in their 40s, two people in their 60s, but the majority of them have been people who are in their 70s, 80s and 90s, including somebody who was over 100," Henry said Friday. "This again reflects that young, healthy people have relatively mild illness," 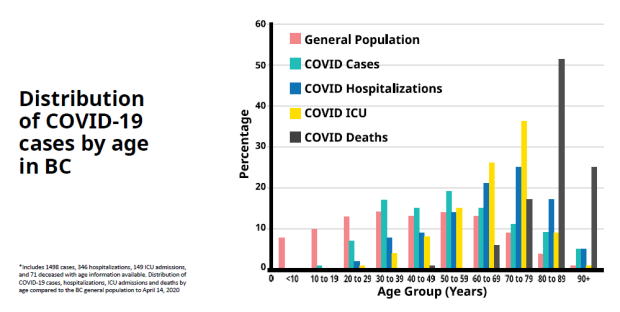 As well, of the 707 patients that the province has risk factor information for, nearly 36 per cent had at least one chronic condition like cancer, diabetes or cardiac disease. Health officials explained that it takes time to get risk-factor information for all patients, but more information should be coming soon.

The data also shows that more women than men have tested positive for the virus. Health officials said that's likely because of the extensive testing done amongst health-care workers, which are mostly female in B.C.

How does B.C. compare to other provinces?

While the rate of the virus might be slowing in B.C., that's not necessarily the case in all provinces.

"We have flattened and levelled over the last few weeks," Henry said.

In other provinces like Quebec and Ontario, however, the curves of new cases and deaths climbed more steeply than in B.C. To date, Ontario has recorded 478 deaths connected to the virus, while Quebec has had 688. Meanwhile B.C. has had recorded 78 COVID-19 deaths.

On the other hand, provinces like Prince Edward Island, New Brunswick and Manitoba have all had relatively flat curves.

But Henry said the curves appear to be levelling off in other provinces and said she hopes that trend continues.

What are B.C.'s next steps?

While cases appear to be levelling off in B.C., Henry said it's crucial that residents keep physically distancing while also minimizing any unintended negative consequences.

"What we need to focus on for the coming weeks and months is just the right amount of restriction so that we don't end up having those explosive growths, we don't end up overwhelming our health-care system," she said.

To better understand possible next steps, the BC Centre for Disease Control is preparing two types of models: one that predicts possible new cases if no changes were made in restrictions, and another that uses simulations to understand what would happen if some conditions are changed.

For example, one model looks at how B.C.'s virus curve might be affected if physical distancing restrictions are slowly lifted. The model suggests that if restrictions are lifted completely, B.C. could see a significant increase in the number of patients in critical care. 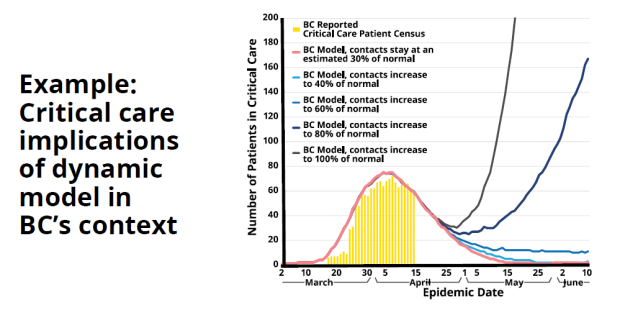 But the first restriction that might be lifted, officials said, could be elective surgeries, particularly because the province's health-care system is well-prepared to manage COVID-19 patients.

That wouldn't happen until Mid-may however, and several requirements would need to be met first.

However health officials said other activities, like non-essential travel, won't be possible for some time and likely not until a vaccine is available.

"Our new normal … is going to be modifications of what we're seeing right now," Henry said.