Which B.C. regions had the most COVID-19 cases last week? New map released 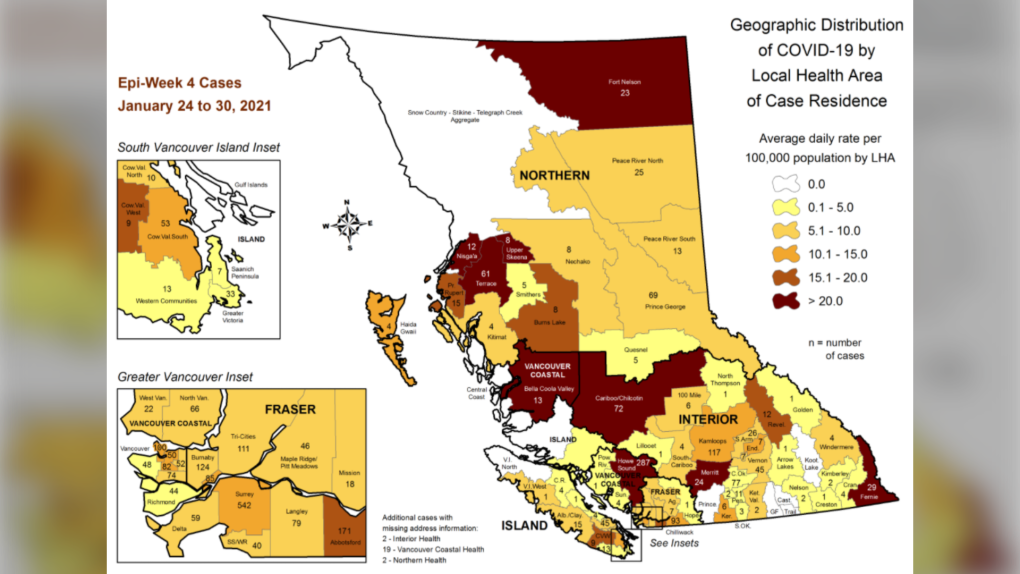 The latest map of COVID-19 infection data from the B.C. Centre for Disease Control. (BCCDC)

VANCOUVER -- COVID-19 clusters in Whistler, the Interior and the north stand out on the B.C. Centre for Disease Control's newest weekly map of coronavirus cases.

The map divides the province into "local health areas," with each one showing the number of cases recorded there during the week of Jan. 24 to 30 and shaded according to the number of daily cases per 100,000 residents in each area.

While the largest raw numbers remain in Metro Vancouver, as they have throughout the pandemic, the latest map shows much higher per-capita caseloads elsewhere in the province.

The Howe Sound local health area leads the Vancouver Coastal Health region in both categories, a fact likely attributable to the recent surge in infections in the Whistler area.

Howe Sound saw 287 COVID-19 cases confirmed during the week that ended Jan. 30, more than any other local health area in Vancouver Coastal Health, though the City of Vancouver has more total cases - 406 - if its six different local health areas are combined.

Howe Sound is also one of only two regions of Vancouver Coastal Health that recorded more than 20 cases per 100,000 residents during the week in question, the highest per-capita case total shown on the map.

The other local health area in Vancouver Coastal Health that recorded this many cases per capita was the Bella Coola Valley, where a total of just 13 infections were confirmed, but the overall population is much lower.

Meanwhile, for the second week in a row, no local health area in the Fraser Health region - which has seen the largest overall number of COVID-19 cases in B.C. since the pandemic began - recorded more than 20 cases per 100,000 residents.

Indeed, only one local health area in Fraser Health recorded even 15 to 20 cases per 100,000 during the week in question. That region was the City of Abbotsford, with 171 cases total.

Elsewhere in B.C., there are three regions in Interior Health that crossed the 20-cases-per-100,000 threshold last week. Those local health areas are Cariboo/Chilcotin (where 72 new cases were added), Fernie (29) and Merritt (24).