What the devil? Pregnant white statue spotted in East Vancouver

Nearly a year after a provocative Satan statue that popped up in East Vancouver was removed by Vancouver city officials, another eye-popping effigy has emerged.

Last September, the racy red devil – sporting a full erection – sprang up near the Clark Drive SkyTrain station, but no one seemed to know where it came from.

Crews removed it within hours, saying it wasn’t officially commissioned by the City of Vancouver.

Now, a new devil has popped up in East Vancouver, and this time it’s a woman.

The pregnant white devil was spotted on top of a building at Main and Kingsway on Thursday.

It was taken down promptly, but not before Georgia Straight contributor Michael Mann snapped several photos of it.

No one has claimed responsibility for the newest statue, and its origins remain a mystery, even to city staff.

A city hall spokesperson told CTV its staff did not remove the female statue.

another naked devil sculpture has appeared. this one is preggo and above gene at main + kingsway. pic.twitter.com/GmiIzRGvVS

and the fun is over. dude just took the naked, pregnant devil lady down. :( pic.twitter.com/OqOR2EkxIa 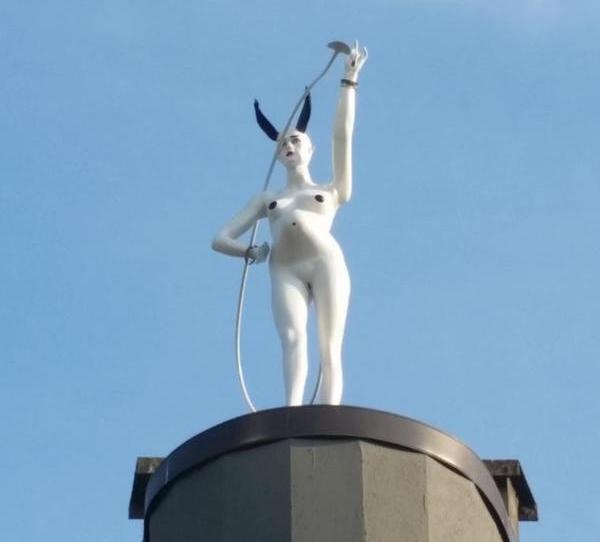