What do the budget's child care changes mean for B.C. families?

The British Columbia government's dramatic new plan to help subsidize child care will have a big impact on low-income earners in the province, but many middle-class families will see little to no cost savings.

A child care fee reduction of up to $350 announced Tuesday “would not give us immediate financial relief," said Tara King, a mother of two from Coquitlam, B.C. who said she pays around $2,000 a month to have her boys looked after.

"It's very important for my husband and I that we have a licensed child care facility for our sons and we struggle every day to be able to afford that for them," she said.

King said the sky-high child care costs are making it difficult for them to pay their mortgage and save for their sons' education.

In Tuesday's budget, Finance Minister Carole James said the province is moving to address those concerns by investing more than $1 billion to create more licensed child care spaces and offer monthly benefits to as many as 86,000 families.

Starting April 1, the government will fund licensed care providers so they can cut as much as $350 a month from the cost of a child care space.

"Parents want quality child care that is safe and gives them peace of mind while they are at work," James said in her speech.

"Not only will this help children get off to a good start, more mothers will be able to work and new jobs will be created, which will boost the economy and increase tax revenues almost immediately."

A new benefit program will come into effect in September, offering families up to $1,250 a month per child.

Most families that make $45,000 or less in combined income will get free child care.

Those earning up to $111,000 will pay less than they currently do. The benefits those families receive will be based on income.

The province also promised to create some 22,000 new licensed child care spaces over the next three years. 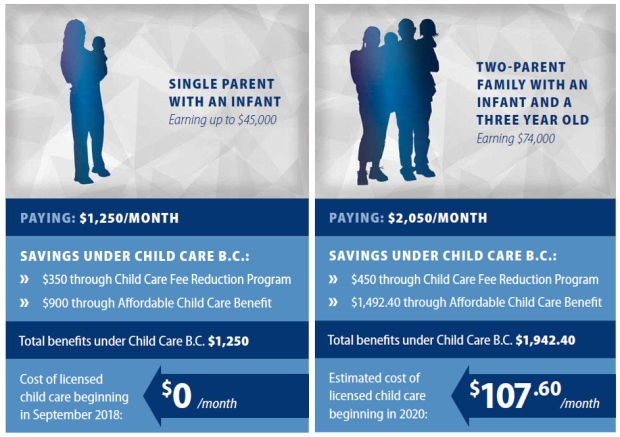 "It's a great first step—just the recognition and knowing that they're working towards accountability I think is extremely valuable," King said.

"Knowing that it's going to families that possibly need it more than we do is a good initiative. I know it's not an easy fix. It's going to take years to get to where we need to be."

While child care advocates are pleased with the announcements, some are worried the plan will put more money in the pockets of child care providers—not parents.

"We don't want to see the situation where, as operators receive funding to lower fees, that they simultaneously raise their fees so parents are no better off," said Sharon Gregson of the Coalition of Child Care Advocates of BC.

Gregson is also behind a campaign to put pressure on the government to introduce $10-a-day child care in the province, a promise Premier John Horgan campaigned on.

While $10-a-day child care was not announced in this year's budget, James also reminded British Columbians that this round of child care announcements was just the first step in a gradual process to help families.

"Universal child care is our commitment," the minister said. "There's more to come."

In the meantime, King said she'll be following the government's actions and promises on child care closely.

"We can't have it all. We know that we can start somewhere though," she said.

With files from The Canadian Press and CTV Vancouver's David Molko