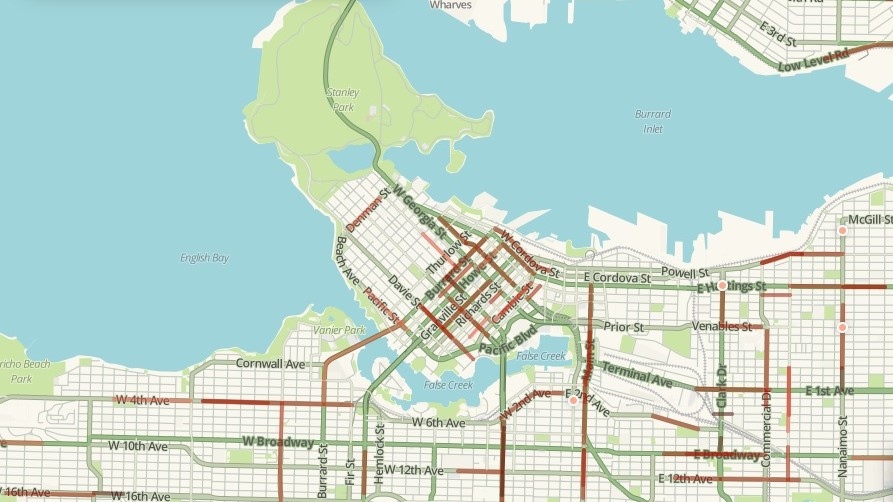 Downtown Vancouver is expected to be congested this weekend. (CTV live-updating traffic map)

The City of Vancouver has issued a traffic advisory for drivers this weekend.

There are also several road closures and traffic changes in the downtown area that could add to the congestion.

Mainland Street in Yaletown will be closed between Smithe and Nelson streets from 7 a.m. to noon on Saturday and from 10 a.m. to 5 p.m. on Sunday.

Nearby, utility work will reduce Smithe Street to one lane westbound between Cambie and Homer Streets during the same hours.

Seymour Street will also have lane restrictions between Smithe and Nelson on Saturday, with a planned crane lift resulting in a single lane of traffic northbound between from 7 a.m. to 2 p.m.

In the West End, Davie Street will be closed westbound between Nicola and Bidwell streets from 7 a.m. to 7 p.m. on Saturday. One lane of eastbound traffic will be retained.

On Sunday, utility work in the vicinity of Seymour and West Georgia streets will limit the former to one northbound lane between Robson and Georgia and the latter to one lane in each direction between Homer and Seymour. Both changes will be in effect from 7 a.m. to 5 p.m.

Outside of downtown, ongoing projects around the city will continue to result in traffic restrictions. More information about these projects can be found on the city's road closures page.