'We need a public outcry': B.C. father with ALS ends life after struggle to stay at home 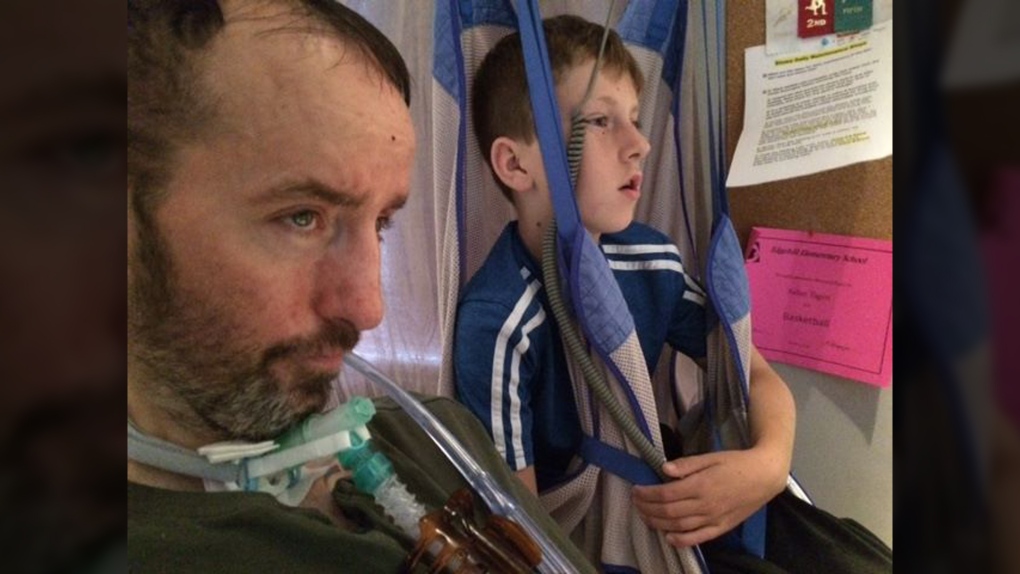 Sean Tagert (left) is seen with his son in this image from Facebook.

Faced with declining health and shortage of caregivers, a Powell River man with ALS opted for medically-assisted death on Tuesday, leaving his mother and doctors urging policymakers to make changes to the medical system.

Sean Tagert was in the late stages of amyotrophic lateral sclerosis, also known as Lou Gehrig’s disease, which left him completely paralyzed and relying on a ventilator to breathe – while his mind stayed fully intact.

His mother says he was growing weaker and losing kidney function and despite wanting to watch his 11 year-old son grow up, decided to end his six-year struggle with the disease.

"Our family spent those last days together with him and like Sean always does, he did it on his own terms," said Patricia Mennitti.

In Tagert’s final weeks, the senior citizen says they were continuing to have trouble finding care aides willing to work for the funding they had available, leaving her caring for her son at home, while tending to her octogenarian husband. She was struggling and Tagert was frustrated Vancouver Coastal Health refused their repeated requests for help to cover 24-hour care.

VCH confirmed to CTV news in April that they were funding 20 hours of care, but if Tagert wanted round-the-clock support he would need to move into a group care facility the family says was unable to accommodate the sophisticated communication setup he had at home.

“He felt normal when he was online," said Mennitti. "The technology is changing the face of ALS whereby you can have a life afterward but the system is not equipped to keep pace with the new technologies yet.”

With a specially-equipped computer, Tagert told his Facebook community he would be ending his life this week after being emotionally and physically exhausted fighting Vancouver Coastal Health for more funding to stay at home, near his family and communications equipment: "I know I’m asking for change. I just didn’t realize that was an unacceptable thing to do. Hundreds of British Columbians dying horribly every year."

Tagert’s case has drawn national attention, including the Canadian Society of Palliative Care Physicians, whose president told CTV News Tagert’s case is exactly the kind of situation slammed by a UN Special Rapporteur who called on the federal government to “provide the necessary support for persons with disabilities to live independently in their communities. This should be recognized as a human right and not merely as social assistance program."

"I think we need a public outcry around peoples' right to access care, to support them in chosing a right to life rather than just a right to death," said Dr. Leonie Herx from Toronto. “A person should have the resources provided to live at least in their community, not to have to move across to another city.”

Herx echoed Tagert’s own physician, Dr. Stephen Burns, who pointed out that home care has been proven to be more cost-effective than group home or palliative care for patients with needs as complex as Tagert’s – not to mention the positive impacts of being closed to family and supporters.

“We need to ensure [physical] needs are met before we get to a place where people are feeling like death is the only option," said Herx.

Vancouver Coastal Health says the Evergreen House facility in North Vancouver is able to care for fully-ventilated patients with communications equipment like Tagert relies on, but acknowledges there’s a wait list for long-term care. Mennitti says patients as sick as Tagert don’t get enough one-on-one attention in institutional settings and wants to see specialized care geared specifically for ALS patients, often described as living in a “glass coffin,” as the disease slowly steals their mobility, leaving them feeling like they’re trapped in frozen bodies with fully-functioning minds.

"Watching the decline into suffering, that is the part that tortures you day and night,” says Mennitti.

"I would like to see facilities put up -- even if it's just an area of a general facility that are ALS-oriented. There's no such thing as an ALS facility [in B.C.]."