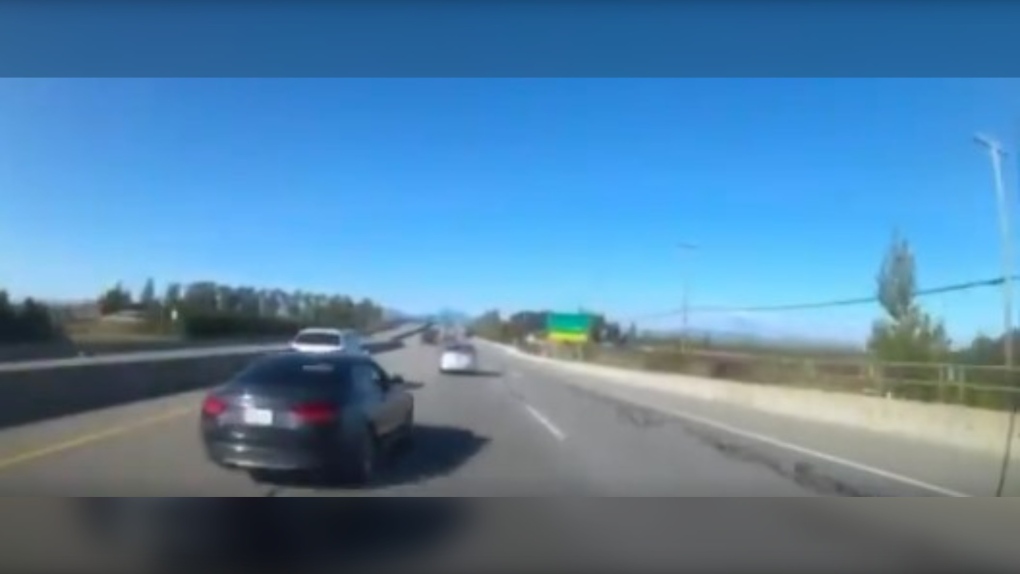 A driver was seen speeding and weaving through traffic in Delta. (Delta Police Department/Twitter)

VANCOUVER - Delta police are circulating dashcam footage as a warning to drivers after a car was seen traveling dangerously and nearly hitting a police cruiser on the side of the road.

Police posted the video to Twitter Friday morning, but the incident appears to have happened in late September.

The footage shows the driver speeding excessively and weaving through traffic while an unmarked police car has another driver pulled over. The police car had its red and blue flashing lights activated at the time, which means the driver should have slowed down and moved over.

Drivers – you are required to SLOW down and MOVE over when there are flashing blue, red or yellow lights on a vehicle at the side of the road. Narrow miss that could have been much worse for officer and motorist. Thanks to dashcam, car owner got $368 ticket. pic.twitter.com/HRCYlekzeL

"This type of driving behaviour is so reckless," said Acting Insp. Ryan Hall in a news release. "This is exactly how fatal collisions happen. Less than a second of difference and we could have had a significantly different outcome.

"It was a beautiful sunny afternoon. It takes just one person, with selfish or unthinking driving behaviour, to cause unbelievable carnage and pain. We would also ask people to slow down and move to the opposite lane as dictated in the Motor Vehicle Act for their and the officers' safety."

While police don't say how fast the driver had been going, they do say that it was another driver who caught the incident on their dashcam and found the incident concerning enough to submit the footage to police.

Police were able to identify the registered owner of the vehicle, who lives in Delta.

"Our officers were able to isolate the licence plate of the car in question from the video, and the officer who was nearly struck decided to pay a visit in person with the registered owner of the vehicle," Hall said.

Earlier this month in Vancouver, a distracted driver actually did strike a police cruiser who was on the side of the road during a distracted driving campaign. The officer was injured in that incident.

#VPD is dedicated to increasing #roadsafety with targeted enforcement of unsafe driving behavior. A Vancouver Police Constable was struck by a distractive driver last month while working on a #DistractiveDriving Campaign. Please drive with care and keep your eyes on the road. pic.twitter.com/abpb6Zowmy

In the Delta incident, the owner of the vehicle was fined $368 for driving without due care and attention. They did not get six points on their licence, however, because the actual driver could not be identified.