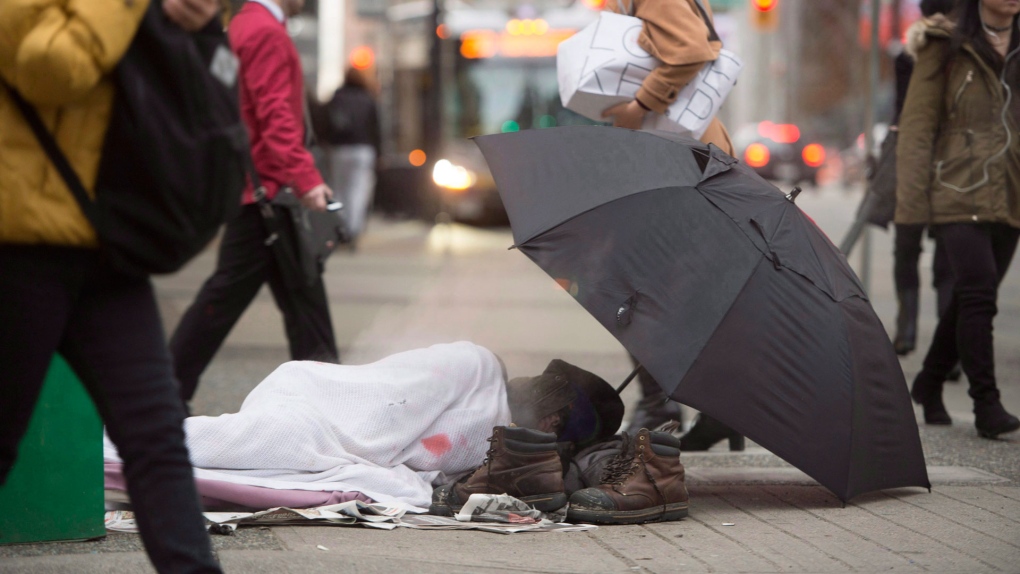 Pedestrians walk past a person sleeping on the street in downtown Vancouver, B.C., Monday, Jan. 30, 2017. THE CANADIAN PRESS/Jonathan Hayward

The number of homeless in the city of Vancouver is up to 2,223 people, according to numbers released by the city on Wednesday.

The data comes from the city’s annual homeless count that takes place every March.

It's the highest number of homeless people counted by the city since the homeless count started in 2002, and the fourth straight year the number has gone up.

"While this year’s Homeless Count results show that the bold actions being taken by the City and its partners might be beginning to turn the tide on the growth of homelessness in Vancouver, there are still more than 2,000 people without a home in our city. This is unacceptable," Mayor Kennedy Stewart said in a release.

Stewart says the provincial government has stepped up with funding, but is still waiting for money from the federal government.

Homeless counts were initially held every three years, until the City of Vancouver began annual counts in 2010.

"The nature of the on-going challenge of homelessness is that, in recent years, more and more people have been living outside, on the streets, and in encampments," the report reads. "The City works hard to try and keep all our residents safe and has been responding to growing concerns around the health risks, including risk of fire, in the City’s largest encampment at Oppenheimer Park."

The staff report placed large blame on income growth not keeping pace with rent, leading to an affordability crisis.

"Data from Statistics Canada’s 2016 Census shows that there are almost 42,800 renter households with household incomes of $50,000 or less in Vancouver spending 30% or more of their income on rent."

The new numbers come a day after the city announced increased protection for vulnerable renters and the creation of a renter's office.

The 2019 count was performed over a 24-hour period on March 12 and 13. Over 400 specially trained volunteers conducted the count throughout the city. Information was gathered inside shelters during the evening and on the streets the following day.

In 2017 the B.C. government announced $66-million in funding for 600 units of housing. According to the city, 606 units of temporary housing have been added as of October 2018.

In 2008, then-mayor Gregor Robertson promised an end to homelessness by 2015.