Oppenheimer Park: Fence removed ahead of May 7 protest 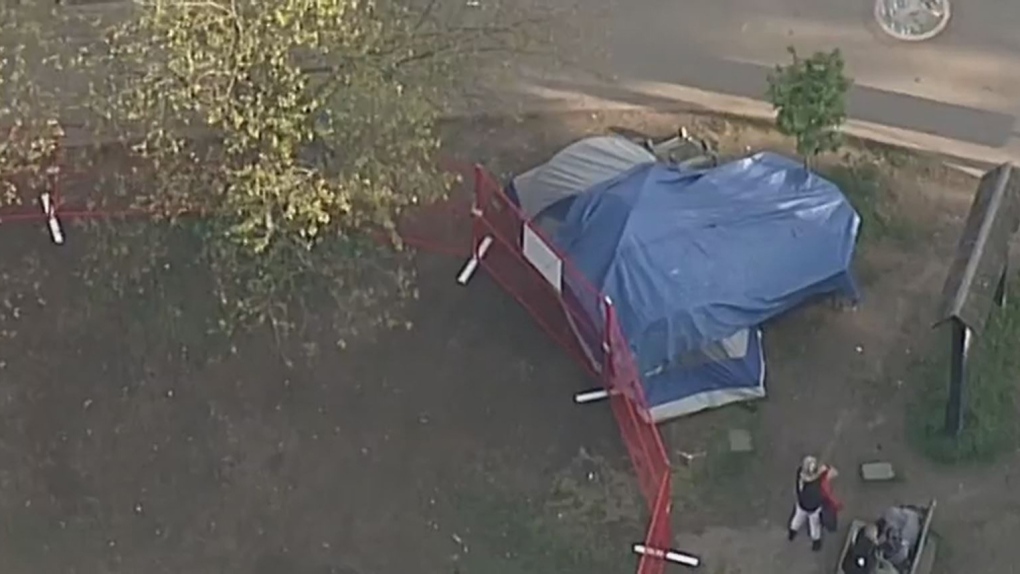 A fence is seen near a tent city in East Vancouver's Oppenheimer Park on April 24, 2019.

The Vancouver Park Board is removing a fence set up to facilitate lawn maintenance at Oppenheimer Park more than a month ahead of schedule due to a planned protest at the Downtown Eastside green space.

The fence was first put up last week. At the time, city staff said the barrier was a temporary measure and had nothing to do with the growing tent city at the site. The park board intended to remove the fence before the National Indigenous Celebration planned for June 16.

"The park board is reluctant to take the measure of removing the fence, however it is necessary in the interest of public safety," the board said in a statement Friday. "Removing the temporary fencing means that repairing the field will no longer be possible ahead of community gatherings such as National Indigenous Peoples Day and the Powell Street Festival."

According to the park board, the May 7 protest is being organized by the Vancouver Area Network of Drug Users, Carnegie Community Action Project, American Indian Movement and Our Homes Can’t Wait – groups that advocate the area's homeless and drug users.

"The City of Vancouver has done everything it can - including police harassment, closing the toilets and now a metal fence - to shut out and displace people who are surviving the housing crisis by camping in the park," organizers said in a Facebook event page for the gathering.

"Join OUR HOMES CAN'T WAIT to defend Oppenheimer Park, demand that the fence come down, and tell the CoV and the Province to reduce and control rents, build housing, and stop criminalizing the poor."

But the park board maintains that the fence had nothing to do with tent city.

"Community advocates have been viewing the fence as a move by the city and park board to displace campers permanently from the park," it said. "This was not the case: campers were not instructed to leave, but rather to move to another section of the park until the work on the grass was completed."

The board also said it has in fact added four portable bathroom facilities to the green space.

A small section of the fence will remain around the Oppenheimer Park medicine wheel healing garden, a feature the park board calls "an important community space for cultural planting, teaching and ceremony.

"The park board hopes protestors will respect this asset and the need to ensure its remediation."