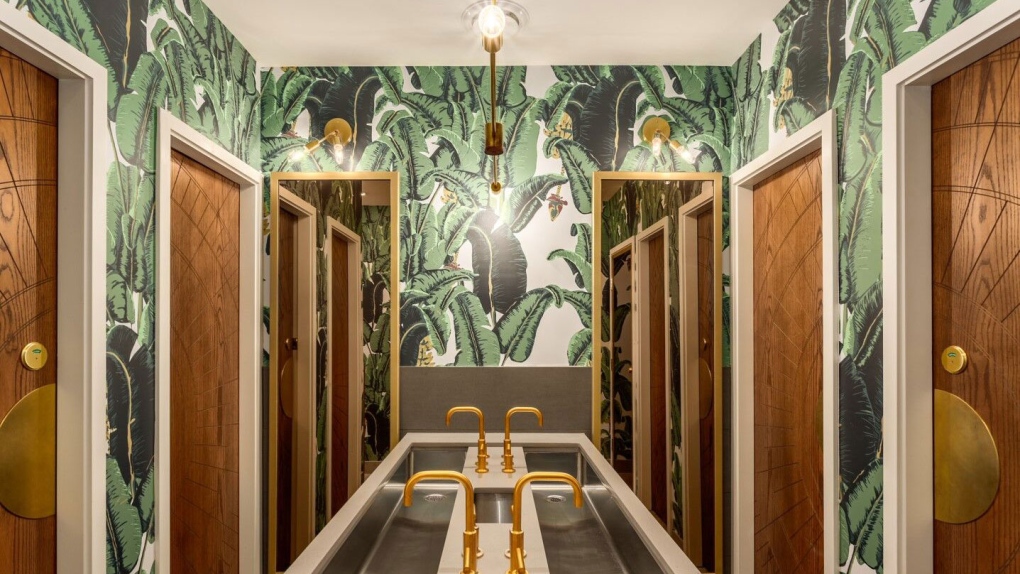 The washroom at Anh and Chi features a custom communal sink and wooden laser-cut doors.

A popular Vietnamese restaurant in Vancouver is up to receive a national honour, but not for its food.

Anh and Chi has been nominated as one of the five finalists in the Cintas 2018 Best Restroom Contest.

“I was intrigued, I didn’t know such an award existed,” said owner Vincent Nguyen.

The restrooms are certainly classy, though, giving Anh and Chi a good shot in the battle for the throne.

The chic spot in Mount Pleasant has gender-neutral toilets in separated rooms decorated warmly with candle and aroma reed diffusers included. Cintas described each bathroom visit as a fully enclosed and luxurious getaway.

Several of Nguyen’s favourite design elements were mentioned in the nomination, including the sleek custom-made trough sink topped with gold faucets that spans the length of the room. Another nod was given to the wooden doors, which Nguyen had laser cut to match the wood in the rest of the restaurant.

As for the leafy wallpaper, Nguyen said he likes how it matches the stained glass and banana plants on the restaurant’s patio.

“We did a complete renovation of my parents’ restaurant,” he said. “When I took over, I decided to do it once, and do it right.”

Nguyen’s parents opened the restaurant at 18th Avenue and Main Street and operated as a pho specialty house for 33 years. When his father died, Nguyen decided to drop out of medical school and take over the restaurant.

“My sisters are helping out and my mom’s still here,” he said. “With any family restaurant it’s all hands on deck.”

He said the washrooms were something he wanted to emphasize in the renovation, and it was important to make them gender-neutral so that the experience would be simple and inviting.

“So many times people overlook the washroom,” he said. “But I think it shows how much you care. If the washroom looks great, everything else must too.”

The contest aims to spotlight public washrooms around Canada that go above in beyond in providing clean and aesthetically pleasing bathroom breaks. Cintas is a company that designs, builds and services bathrooms for business.

Other finalists from around the country include Erin Mills Town Centre in Mississauga, Oretta restaurant in Toronto, the Saskatchewan Science Centre and the St. Albert Honda dealership in Alberta.