Vancouver's skyline at sunrise is shown in this undated handout photo. Vancouver has been placed on travel site Lonely Planet's top ten list of cities to visit in 2020. (Destination BC/Albert Normandin via The Canadian Press)

VANCOUVER -- Vancouver rents have been falling since the start of the COVID-19 crisis, and are down by as much as 15 per cent for some types of apartments, according to data pulled from Craigslist rental listings.

It's an abrupt turnaround from a historic run-up in rent rates that took off in 2016, around the same time that home prices in the Vancouver area also spiked. Vancouver has the highest rents in Canada, according to the Canada Mortgage and Housing Corporation, as well as the highest rate of evictions, according to Statistics Canada.

The Craiglist data was gathered by the author of this story starting in June of 2016 using a computer program that collects information on apartment locations, sizes and rent rates from listings.

Data recently released by the rental listing site Rentals.ca showed rents dropping in the rest of Canada but not Vancouver, while data published by another site, Padmapper, showed Vancouver rents falling in April.

David Hutniak, the CEO of LandlordBC, said vacancies have risen and rental rates have edged downward as the COVID-19 crisis took hold and sent shockwaves through the economy.

"They've seen a nudging up of vacancies, certainly in specific buildings and in higher-priced units," Hutniak said.

"(Landlords) need the cashflow big or small, so they're chipping away at that and trying to navigate through it as best they can." 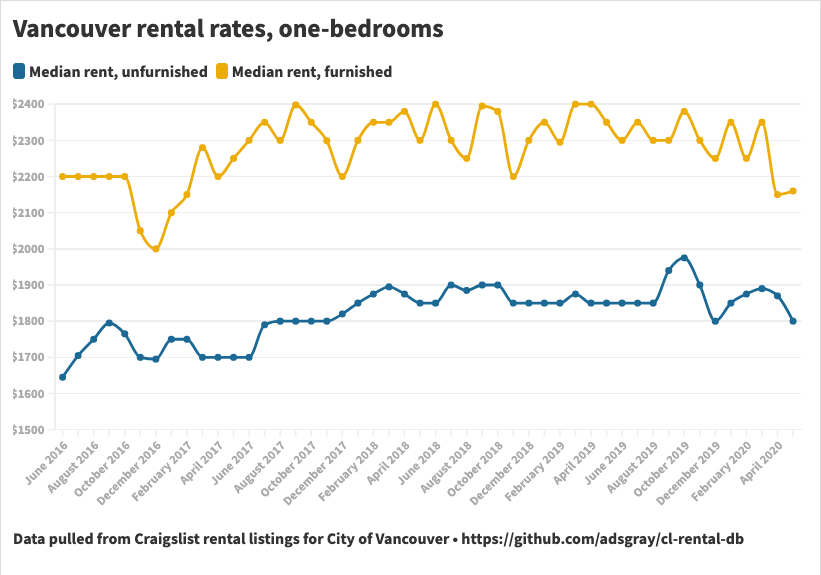 Developers who have just completed new condo or rental buildings are offering deals to entice new tenants. Several listings for the Pendrell, a new rental building in the West End, list the rent for available two-bedroom as $3,850, but offer an initial four months at half that price.

The same deal is on offer at Vancouver House, a recently completed condo building, where the rent for a studio is listed at $2,025, but new tenants can get four months at half that rate. Both buildings were developed by Westbank.

"I'm going to guess that prospective tenants are monitoring the markets, so we might see tenants who are in those higher-priced units looking to move in to … a similar unit but at a better price point," he said.

While Vancouver's notoriously high rents are falling for the first time in years, they're still not affordable for the average resident, said Andy Yan, an urban planner and the director of Simon Fraser University's City Program.

Yan estimated that rents would have to fall to around $1,395 for a one bedroom to be affordable to a person making $50,250 — the median income for a renter in Vancouver.

Whether rents will fall further depends on how fast the economy recovers and whether international students and foreign workers in industries like film return to the city, Yan said.

Yan noted that government emergency benefits like the federal CERB and B.C.'s rent supplement have cushioned the financial impact of COVID-19. 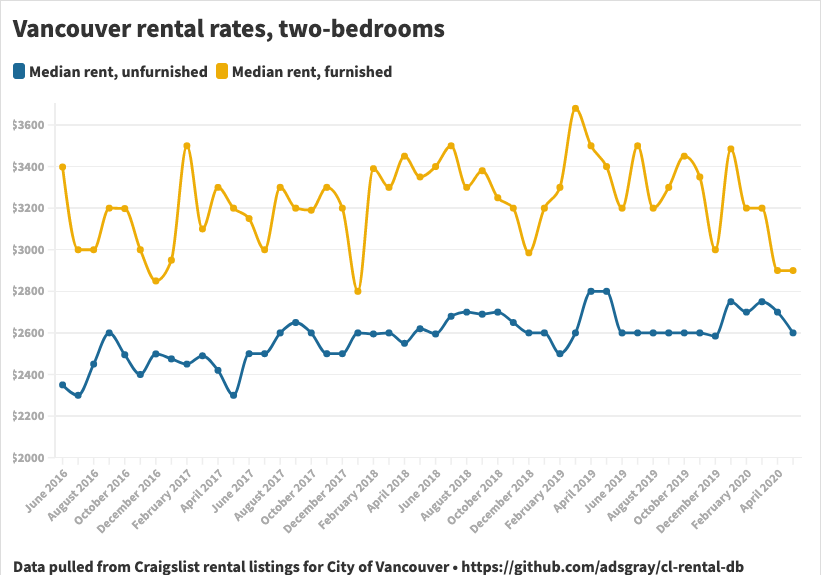 Hutniak is now lobbying for the B.C. government to bring one of those emergency measures, a moratorium on evictions, to an end. He said landlords, especially smaller "mom and pop" landlords, are suffering financially because some tenants aren't paying their rent, and there’s no legal recourse left to landlords who are renting to tenants who refuse to pay.

But the Vancouver Tenants Union has argued that many renters aren't paying rent because they truly can't afford it, and have warned that lifting the eviction moratorium could lead to mass evictions.

In a statement, B.C.'s Ministry of Municipal Affairs and Housing said the eviction moratorium was never meant to be permanent and renters are responsible for paying outstanding rent after the moratorium has lifted.

"However, it’s important that vulnerable renters aren’t caught by surprise on any changes to the halt on evictions," ministry staff wrote in a statement to CTV News Vancouver.

"We are committed to giving people advance notice before we make any changes to the measures around evictions and are working on how that transition will happen to ensure renters and landlords are able to plan and are supported." 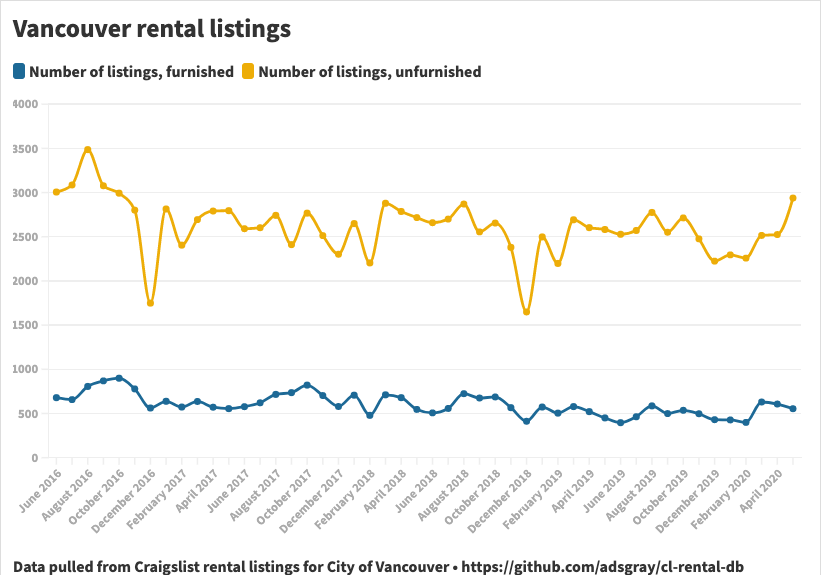