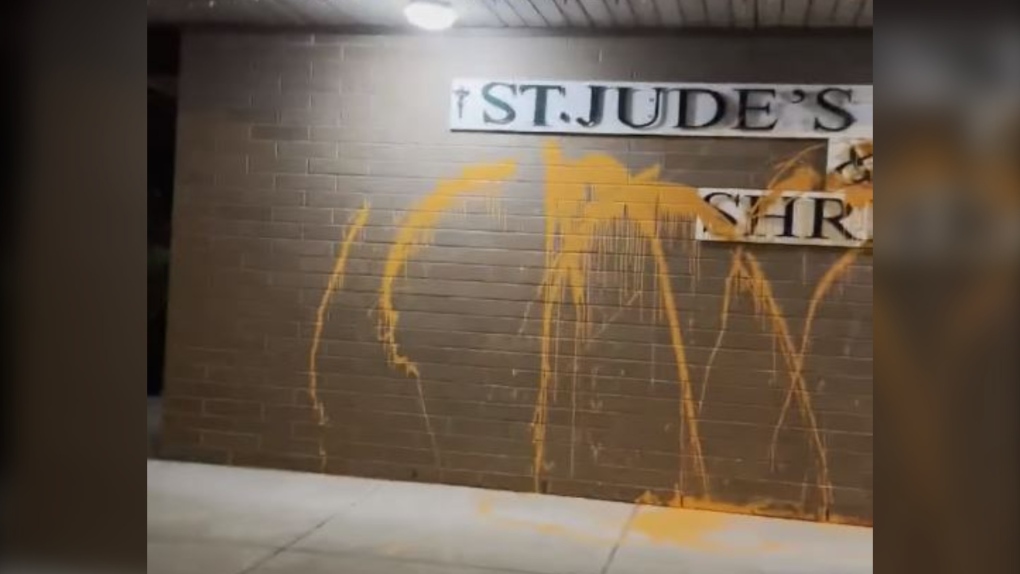 Police in Vancouver say they're investigating the vandalism of multiple churches in the city.

Three churches have been targeted since the beginning of June, local police confirmed with CTV News Vancouver. Most recently, St. Jude Parish on Renfrew Street was vandalized on July 1.

The church posted videos on Facebook that appeared to show multiple people in face masks vandalizing the property. It's unclear how the church obtained the video.

The videos show multiple people walking up to the front of the church with what appears to be buckets of orange paint. They can be seen spreading paint on exterior walls and windows of the building.

It's unclear what time the incident happened, though it's dark outside in the video.

In a statement to CTV News, Vancouver police called the incident "devastating."

"Our neighbourhood police officers are following up with the churches that have been vandalized to mitigate future risk," Const. Tania Visintin said in an email.

"They are going over security measures they can take to hopefully either prevent crimes or assist with investigations in the future (ie: better lighting, installing security cameras). Neighbourhood policing officers will be paying special attention to those churches in their district."

Other churches were targeted in the country on Canada Day. In Calgary, 10 churches were vandalized overnight with orange and red paint.

In some places, the shapes of handprints covered parts of the church exteriors as well as the number 215, referring to the discovery in May of 215 unmarked graves at the site of a former residential school in Kamloops. Weeks after that, the Cowessess First Nation said 751 unmarked graves were found near a former residential school in Saskatchewan.

The schools were known for overcrowding, poor sanitation, unhealthy food and menial labour. Harsh punishment was given to students who spoke their native language or took part in traditional ceremonies. Most of the schools in Canada were operated by the Catholic Church.

CTV News Vancouver as reached out to the Archdiocese of Vancouver for more information.

The federal government announced Thursday that Canada will receive 2.9 million doses of Pfizer’s pediatric COVID-19 vaccine shortly after its approval by Health Canada for the five to 11 age group.

The Vancouver Police Board is to hear a report Thursday recommending the force change its handcuffing policy after the arrest of an Indigenous man and his 12-year-old granddaughter at a bank in 2019.

Ontario is no longer providing the federal government with COVID-19 flight exposure data, citing an increase in public health measures and vaccinations.