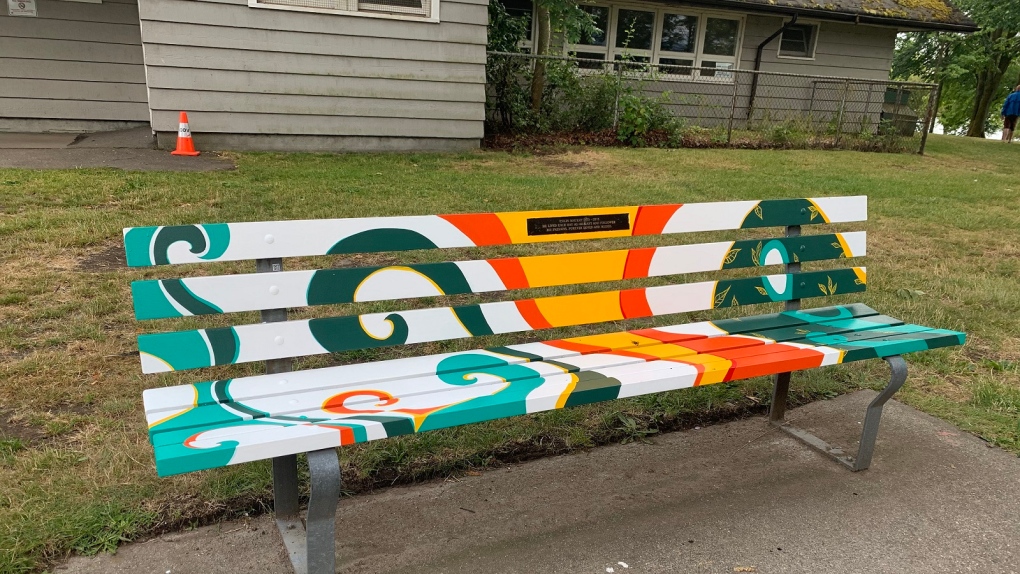 Goudkova was putting the finishing touches on the piece when she was told the Park Board wanted to remove it within days. (Regan Hasegawa/CTV)

After a Kitsilano family pleaded for a change in polices when they were told their memorial bench was going to be removed, the Vancouver Park Board is exploring options for allowing bench beautification across the city.

Following his death, Colin Mackay's family paid the park board $5,500 to dedicate a bench to him at Kitsilano Beach Park. As a way to honour the fourth year of his passing, his partner, Julia Goudkova, decided to paint the bench.

However, last month, she was told any art on memorial benches is not allowed and the paint would be removed. Later, that decision was delayed.

At Monday's park board meeting, Commissioner Tricia Barker put forward a motion asking the board to consider options for allowing décor on memorial benches.

She also asked that the bench dedicated to Mackay be left until a policy was decided on.

"In a growing, vital city such as Vancouver, one that is experiencing increased densification, allowances need to be made to accommodate the many different ways in which people choose to express their grief and give life to memories that honour those no longer with us," Barker's motion said.

She also mentioned in her motion that Vancouver parks currently have 1,173 dedicated benches, and that they're only cleaned once per year.

After the meeting, Goudkova told CTV News Vancouver that while the park board did vote in favour of looking at beautification options, coating or paint would not be allowed.

Staff have now been tasked with looking at options for artistic enhancements and will bring the issue back to the board in December. In the meantime, Mackay's bench will stay as it is until then.