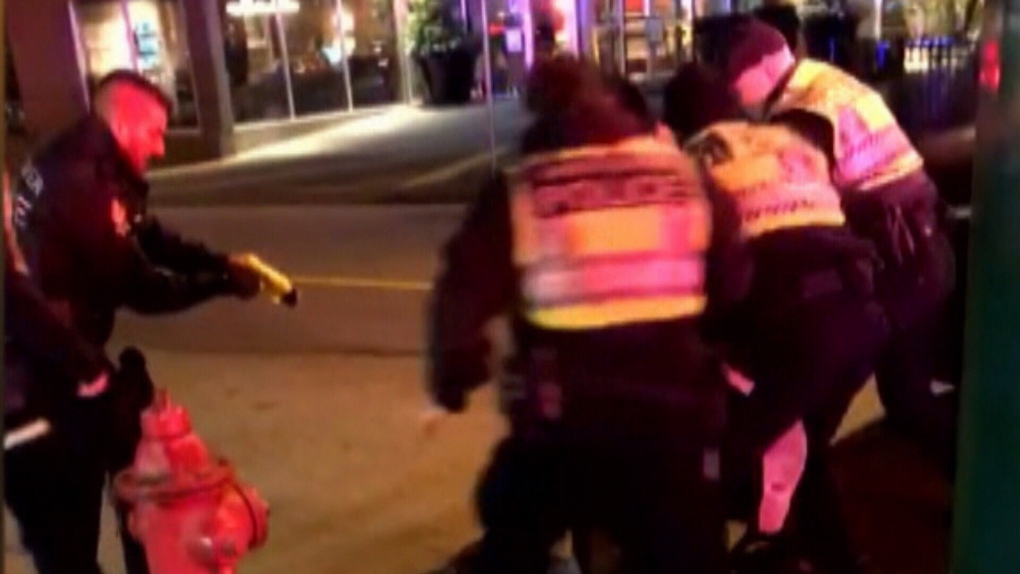 A officer is seen holding a taser during the arrest of Jamiel Moore-Williams in February 2018.

VANCOUVER -- A member of the Vancouver Police Department will be the subject of a review by the Office of the Police Complaint Commissioner.

Const. Jag Ghuman requested a formal review on the record following an investigation conducted by the Delta Police Department.

Investigators in Delta were tasked with looking into allegations of abuse of authority, discreditable conduct, neglect of duty and deceit. The allegations stemmed from a complaint alleging excessive use of force against two people during an arrest.

The arrest occurred April 30, 2018, and the complaint was filed by three people against two officers, one of whom was Ghuman.

The arrest occurred shortly before 4 a.m. near a McDonald's on Davie Street in Vancouver.

Court documents suggest one of the complainants made a comment to officers as they issued a ticket to a cyclist for not wearing a helmet, saying, "That's a (expletive) way to end the night."

The complainants reported that they had started to walk away, when the officers pulled up and got out of their car.

They say the officers told them they were under arrest for jaywalking, and asked for ID.

Those involved reported that backup arrived, and they were then "handcuffed, slammed on the ground and 'beaten.'" Two complainants say the officers made threatening comments during the arrest.

These allegations have not been proven in court.

Upon reviewing the complainants' account, which was filed to the OPCC, the office ruled that, if the situation had occurred as described, it would constitute misconduct, and ordered a review by the Delta Police Department's professional standards investigator.

Delta police say they found he had committed discreditable conduct and deceit, according to a statement from OPCC Friday, announcing the review.

The proposed disciplinary measure from the DPD investigator, who found this to be substantiated, was a written reprimand.

The allegation of deceit comes from "contradictory oral and written evidence" during the investigation, Delta police told the OPCC. The proposed disciplinary measure for this alleged violation of the act was suspension without pay for 15 work days.

As for the other allegations – use of force and provision of Charter rights to one complainant – the Delta investigators said they were not substantiated.

Following the report from Delta, Ghuman disputed the finding of misconduct, and has requested a review on the record from the OPCC.

In his request, he noted one investigator found he did not commit deceit, while the other ruled he did, suggesting that the decision of one trumping the other "has the appearance of being arbitrary."

Additionally, the request noted, Ghuman was "a very junior officer at the time," and a finding of deceit could impact the rest of his career.

"The request proposes that the highest level of justice is called for in the most serious cases, and that a review is needed to ensure that the process as a whole has been fair, and appears to be fair," an advisory from the OPCC summarized.

The police complaint commissioner agreed to the review, a move necessary when the commissioner believes there are reasonable grounds to believe the findings are incorrect, incorrectly applied or considered to be in the public interest – as in this case.

Factors behind the decision include that deceit is one of the most serious findings under the Police Act.

Retired provincial judge James Threfall will serve as adjudicator in the review, which has not yet been scheduled.

Read more in the official notice of review on the record.