Vancouver might be known for its luxury homes and picturesque skyline, but a Canadian pest control company suggests there's also something far less appealing roaming around.

The city has been named the province's "rattiest" for the third year in a row by Orkin Canada.

Langley, Kelowna, Duncan, Abbotsford and Coquitlam rounded out the top 10.

This isn't the first time Vancouver's rat problem has made headlines.

Back in December, an Instagram user posted a viral clip purportedly showing the rodent being lifted out of one of the Manhattan clam chowder bread bowls at the popular Crab Park Chowdery.

An inspection ordered after the incident found evidence of rodent activity in the commissary kitchen where the chowder had been prepared and deemed all food coming out of the facility "unfit for human consumption."

The owner of Crab Park Chowdery has consistently denied the rat incident took place as depicted and has questioned the authenticity of the video, but the business ended up closing its doors for good in January.

Orkin ranked the cities based on the number of rat and mouse treatments the company performed in each place in 2018.

As the weather gets warmer, Orkin is offering home and business a few tips to help keep pests out, including sealing any cracks or holes in your foundation, tripping trees and shrubbery around your property and eliminating moisture sources.

According to the company, rats can directly and indirectly transmit a number of serious diseases including leptospirosis, which can cause liver and kidney damage.

Inhaling dust contaminated with rat urine or droppings can also lead to Hantavirus Pulmonary Syndrome, a viral disease that causes breathing difficulties that may prove fatal if not properly treated. Rats can also be a source of allergens. 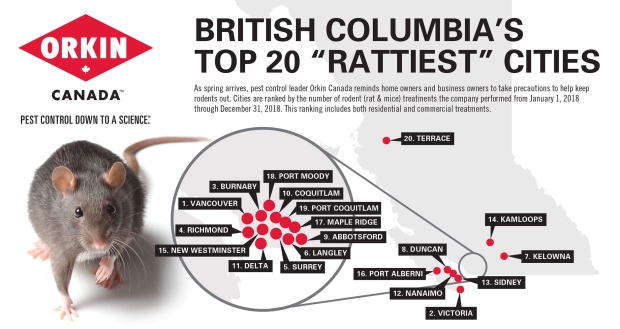