Vancouver has the worst traffic congestion in Canada again, according to this ranking

TomTom's Traffic Index looked at 416 urban areas in 57 countries. In 40th place worldwide, Vancouver is the worst city in Canada when it comes to congestion.

While the city has fallen slightly from 36th place in 2018, the new data suggests last year was slightly worse. It ranked the congestion level at 39 per cent – up one per cent over the last two years.

The percentage, TomTom says, refers to how much more time a trip would take than it should if traffic was light. In Vancouver's case, a driver will spend almost 40 per cent more time in traffic during rush hour in the region. Read more about the methodology here.

So how bad is it?

Vancouver was 40 places higher in the global ranking than Toronto. Canada's largest city came in 80th overall, with a congestion level at 33 per cent.

TomTom says it looked at 685.6 million kilometres of roadway in the region.

It found congestion on highways wasn't as bad – during rush hour, a driver's commute would be 28 per cent longer – but those relying on other routes could see their commute extended by 41 per cent during rush hour.

The data suggested the worst time of the week to be on the roads in our region was Thursday from 5 p.m. to 6 p.m. The site claims a driver with a 30-hour commute who was willing to wait to head home until after 6 p.m. could shave six hours a year off the time they spend in their vehicle.

Wondering what the best day to be travelling is? Last year, the lowest average daily congestion in Vancouver was on Christmas Day.

The busiest day on the roads was Thursday, Sept. 12.

Evening commutes are worse Wednesday to Friday, the site suggested, while Tuesday to Thursday have the worst congestion in the morning. 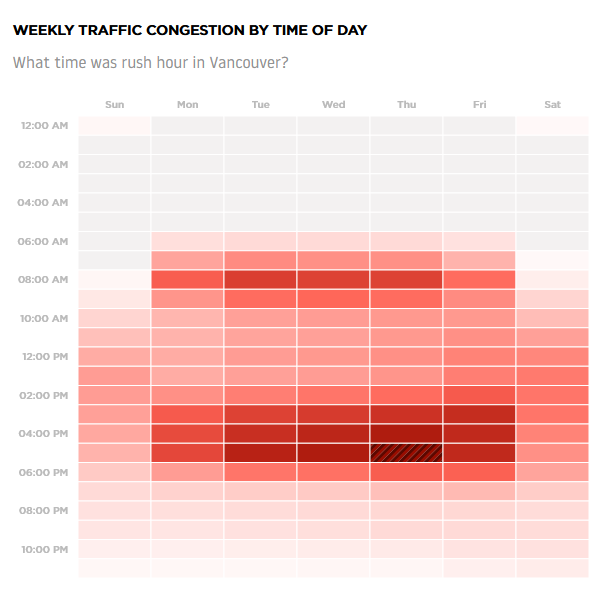 For a commute that would take 30 minutes with no traffic, drivers spent an extra 17 minutes in their vehicle on average during morning rush hour in 2019. At night, it was an extra 21.

A graphic by TomTom suggests what commuters could have done with that time instead, had they had the option:

Ironically, they also could have read all 4,211 pages, then gone back and re-read 274 more, of Marcel Proust's In Search of Lost Time. 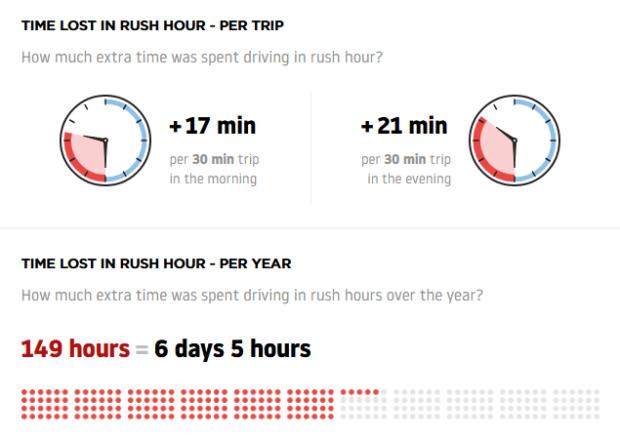 Which cities were the worst?

TomTom suggested traffic congestion in New York and San Francisco was bad, but not as bad as in Vancouver.

But globally, none of those cities made the top five – or even the top 10.

Read more on traffic elsewhere in Canada from CTVNews.ca.