The quick thinking of a group of Vancouver firefighters helped save the life of a family dog Sunday night.

Crews were called to a home on Venables Street near Victoria Drive for reports of a fire just before midnight. Smoke was seen billowing out of a second floor window.

When firefighters arrived they found an unconscious dog inside the home suffering from smoke inhalation.

"We pulled the dog out of the building and were afraid it was deceased," said Batt. Chief Peter Bridge. "Fortunately for us through our medical training we were able to revive the dog."

A team of firefighters spent more than 20 minutes working on the dog, even modifying an oxygen mask to fit the animal's face.

"This was able to move the blood and put the oxygen in the blood so the dog came around, quite surprising," Bridge said. 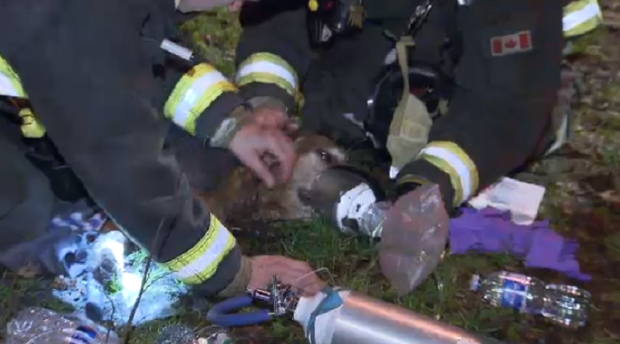 The dog was eventually taken to the vet, and is expected to recover.

Annika Cuzner lives in the building, and watched the firefighters resuscitate the dog.

“One of the firemen brought the dog outside, I think he was breathing but unconscious,” she said. “They put a makeshift mask on him. It took like 20 to 30 minutes, and then he started moving his head and got up and walked away.”

The owner of the building told CTV News that the fire started in the apartment the dog lived in. The renters had gone out and left incense burning, which the pooch knocked over.

“Firefighters are forever rescuing animals from buildings, and we do whatever we can to revive the animals,” he said. “They’re very important fixtures of the people who own them.”