It appears a city council motion to stop allowing duplexes in a huge swath of Vancouver is on the way to passing, even as the city battles an ongoing housing crisis.

Between the five votes of the Non-Partisan Association, including the mover of the motion, Colleen Hardwick, and Green party leader Adriane Carr, the motion appears to have the votes to overcome opposition from the city’s independent mayor.

Hardwick bristled at suggestions that the motion, which would undo a change by the previous council on the eve of the Vancouver election, would limit housing options for Vancouverites.

“I’m not putting forward any kind of motion against duplexes,” Hardwick told reporters outside the inaugural city council meeting on Tuesday. “I myself live in a duplex. That’s not the point. The point is we have a clean slate now and an opportunity to revisit the way we’re planning for our city based on the actual needs of the community.”

Vancouver’s mayor, Kennedy Stewart, had said during the campaign that he supported allowing duplexes in what had previously been single-family homes.

“We’ll see where we get to tomorrow,” Stewart told reporters. “I was disappointed there wasn’t more consultation, but I did say I would support what the previous council passed. We are in a housing crisis here.”

Vancouver City Council under Gregor Robertson legalized duplexes in some 99 per cent of previously single-family zones in September – a sweeping change to some 67,000 properties. At the time he said the idea was to include homes in the “missing middle” and allow citizens more options between condos and expensive single family homes, which in Vancouver are often more than $2 million.

The motion was to be debated on the same day the B.C. government put almost half a billion dollars to create 4900 subsidized homes across the province, with some 1,100 homes in Vancouver, which got some $110 million in investment. 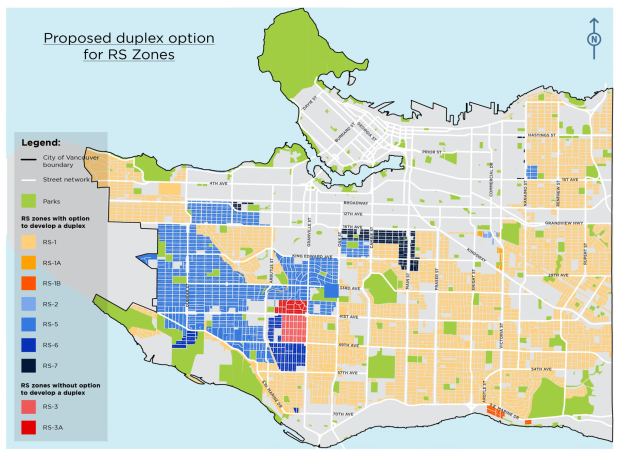 A map from the City of Vancouver shows colour-coded areas where duplexes are allowed under the new zoning. Duplexes will only be restricted in the two red areas.

“One owner for a 3,000 square foot lot is not going to cut it as Vancouver moves forward,” Davidoff said. “To go backwards is a bit of a headscratcher."

Adriane Carr of the Green Party told CTV News that she was voting for the motion because she wants there to be a city-wide plan, which could result in more density even without the duplexes.

There hasn’t exactly been a stampede of people building duplexes since they were allowed. City staff told CTV News there have been only three applications.

The motion was slated for discussion at Tuesday’s council meeting, but will be delayed until Wednesday. If it passes the change will go to public hearing.