VANCOUVER -- New information from the B.C. Centre for Disease Control has revealed that in late March the province reached a record percentage of positive COVID-19 test results, with children aged 10 to 14 showing the biggest share.

While less of them were tested than the week before, the percentage of children aged 10 to 14 years old who tested positive for the coronavirus soared to 20 per cent; older teens tested positive around 16 per cent of the time during the same week, Mar. 21 to 27, while children five to nine years old were at 12 per cent.

"There have been a number of exposure events, as I’m sure you’re aware, in schools not surprisingly related to the increase we’re seeing increases in communities," said provincial health officer Dr. Bonnie Henry when asked about the figures. "The testing was done as people went to back to school but the exposures and transmission we were seeing was over the March break for the most part.”

However, when children were out over Christmas break, infections went down. The seven-day average went from 658 on Dec. 18, to 481 on Jan 22., two weeks after students returned from winter break.

In its weekly COVID-19 Situation Report, the agency also noted that while the overall number of tests performed in the province increased only slightly from the week before, the percentage of positive tests that week “increased dramatically from 8.9 per cent to 12 per cent” compared to the week before.

“This is the highest per cent positivity since the start of the pandemic in B.C.,” wrote the report’s authors.

In Fraser Health, overall publicly-funded tests reached a positivity rate of 12.5 per cent and 14.9 per cent in Vancouver Coastal Health. The highest in the province was a test positivity of 16.7 per cent in the Northern Health Authority, with the Interior at 6.9 and Vancouver Island at 5.4.

“What I’m hearing from pediatricians around Vancouver, Lower Mainland and B.C. in general, yes there are higher numbers of children that do have COVID and are diagnosed with COVID,” said UBC pediatrics professor Dr. Ran Goldman. “This may be related to vaccinating older individuals but also may be related to variants we know are spreading much faster in the community.”

He’s urging parents whose children have even mild symptoms to be tested for the disease so that families know whether to isolate, but says so far children don’t appear to be getting sicker even though there are more of them catching the virus.

Goldman said despite concerns about the B.1.1.7 and P.1 making adults sicker, he hasn't seen evidence of that for younger patients.

“I am not aware of symptoms of the variants are causing much worse disease in children,” said the pediatrician. “I do still hear children are not as sick as adults and to not need the same level of care as adults, but yes, there are higher numbers.”

Goldman said children are typically hospitalized with COVID only when they have been sick for a prolonged period of time, are dehydrated, or extremely sleepy. 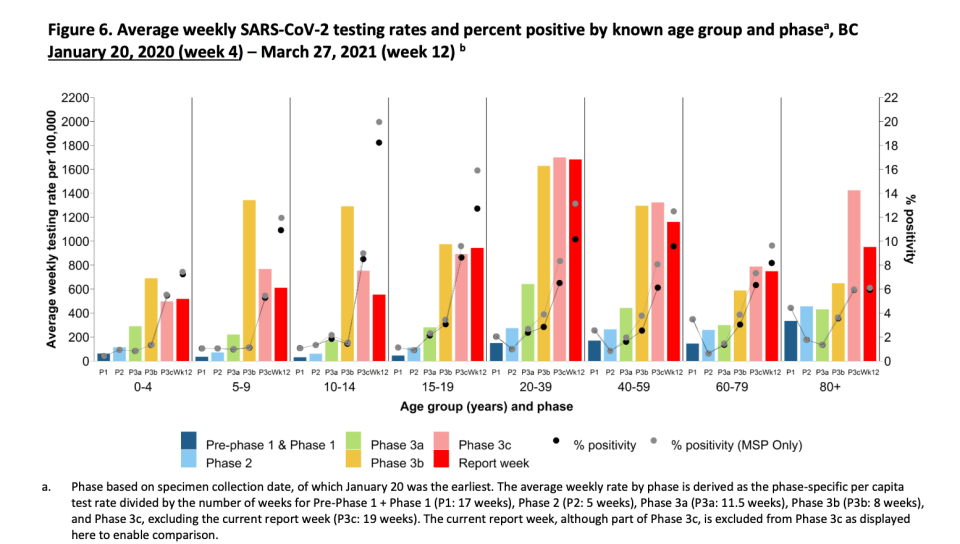 The CDC's situation reports are typically published on Wednesday afternoons and provide a summary of COVID-19 information, but has been criticized as being nearly two weeks out of date by the time the information is public.

While a government website with a "K to 12 Health Check" advises parents to call 811 for instructions even if a child has all the symptoms, Goldman is encouraging them to get a test immediately.

“Any child with symptoms such as fever should be tested for COVID and I would encourage parents to take children to testing centres," he said, noting there's a "gurgle test" available for kids and results are typically ready the next day. “I think it’s important to be vigilant, make sure to identify children that are sick with COVID early on and seek attention if the parents feel they’re sicker and need to be seen by a doctor.”

While she changed the testing criteria in December so that only certain symptoms required immediate action, on Thursday Henry urged people to test and isolate as quickly as possible.

“If anyone in the family is unwell: get tested, do not go to work, do not send your children to school," she said emphatically. "That is important right now as we see the rates in our community take off.”