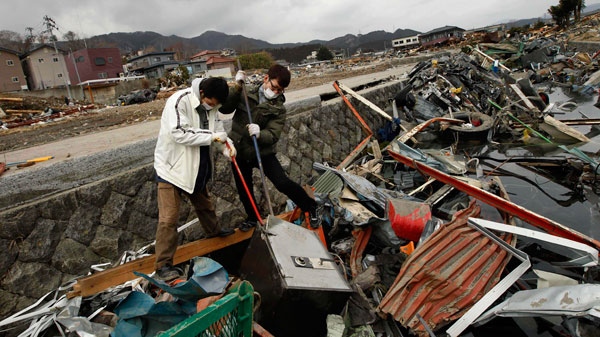 Local men try to break open a safe they said washed away from their restaurant in Ofunato, Japan, Tuesday, March 15, 2011. (AP / Matt Dunham)

Up to 20 million tons of tsunami debris floating from Japan could arrive on British Columbia's shores by 2014, according to estimates by University of Hawaii scientists.

A Russian training ship spotted the junk -- including a refrigerator, a television set and other appliances -- in an area of the Pacific Ocean where the scientists from the university's International Pacific Research Center predicted it would be.

The biggest proof that the debris is from the Japanese tsunami is a fishing boat that's been traced to the Fukushima Prefecture, the area hardest hit by the March 11 disaster.

Jan Hafner, a scientific programmer, told The Associated Press on Tuesday that researchers' projections show the debris would reach Hawaii's shores by early 2013, before reaching the West Coast.

They estimate the debris field is spread out across an area that's roughly 3,200 kilometres long and 1,600 kilometres wide located between Japan and Midway Atoll, where pieces could wash up in January.

Just how much has already sunk and what portion is still floating is unknown.

"It's a common misconception it's like one mat that you could walk on," he said.

Hafner and the principal researcher in the project, oceanographer Nikolai Maximenko, have been researching surface ocean currents since 2009. When the Japan earthquake and tsunami struck, they applied their research to the rubble sucked into the Pacific Ocean from Japan.

They used computer models to track its path, but until the Russian ship STS Pallada sailing from Honolulu contacted them last month, they had no direct observation of the massive debris field.

"From a scientific point of view, it was confirmation that our research was doing something right," Hafner said. "It was big news for us. But it was mixed feelings because you can't be excited about something as tragic as a tsunami."

The magnitude-9.0 earthquake produced the sort of devastation Japan hadn't seen since the Second World War, leaving more than 21,000 dead or injured. The tsunami that followed engulfed the northeast and wiped out entire towns.

The waves inundated the Fukushima plant, triggering the worst nuclear accident since Chornobyl. However, it's highly unlikely the tsunami-generated debris would be contaminated with radioactive material, according to the National Oceanic and Atmospheric Administration's marine debris program. NOAA is also gathering information about debris sightings.

After news of the Russian ship's findings, the scientists have been receiving calls from media worldwide.

The scientists want boaters venturing in the area of the debris to send them details about what they see. Researchers want to know details such as GPS position, time, weather and descriptions of the items.

"We are trying to get across our message that it is coming and it's about time to start planning some action," Hafner said.