Tiny plastic 'nurdles' could be spilling into Fraser River through storm drains: Environmentalists

DELTA - An environmental organization is sounding the alarm over tiny plastic pellets known as "nurdles" that are turning up all over B.C.'s coastline.

Surfrider Canada says that after three years of research, its staff and volunteers have found plastic beads used to manufacture bags, straws and bottles in several places in the Fraser River and up the province's coast. 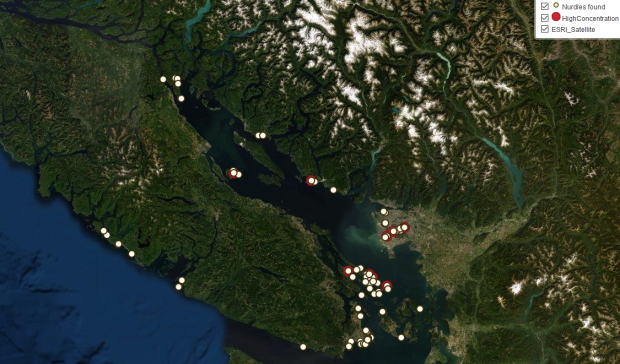 They suggest the pellets are making their way into the Fraser River through storm drains at the manufacturing facilities.

He added that when pellets go into the Fraser River, birds and fish eat them. When humans eat those fish, we could be ingesting plastic pellets too.

"The pellets are known to soak up toxins in the water," Boudinot said. "The bioaccumulation very well could be going up the food chain."

Surfrider is urging the province to investigate and impose stricter regulations on plastic manufacturers. They also suggest manufacturing facilities install covers on their storm drains, similar to the kind required at construction sites.

But Bin Liu, general manager at Interone Plastics Ltd. on Annacis Island, which manufactures plastic pellets, said there's no way his product could get into the river "unless you want to throw them in the river."

He said his pellets are packed "very well" before being loaded into shipping containers.

B.C.'s Ministry of Environment said it would like to thank Surfrider for bringing the issue to their attention, adding that the province is working to reduce plastics in the marine environment.

“When the ministry receives tips about pollution, we take them seriously," the ministry said in a statement, adding that discharging pollution into the environment is prohibited.

However, it added it had no record of complaints related to plastic pellets entering the Fraser River in the last three years. The ministry said it will look into the matter and determine appropriate next steps.

CTV News Vancouver reached out to six plastic manufacturers on Annacis Island, but has not yet received a response.