'This is a test': Emergency alerts sent to cellphones in B.C. 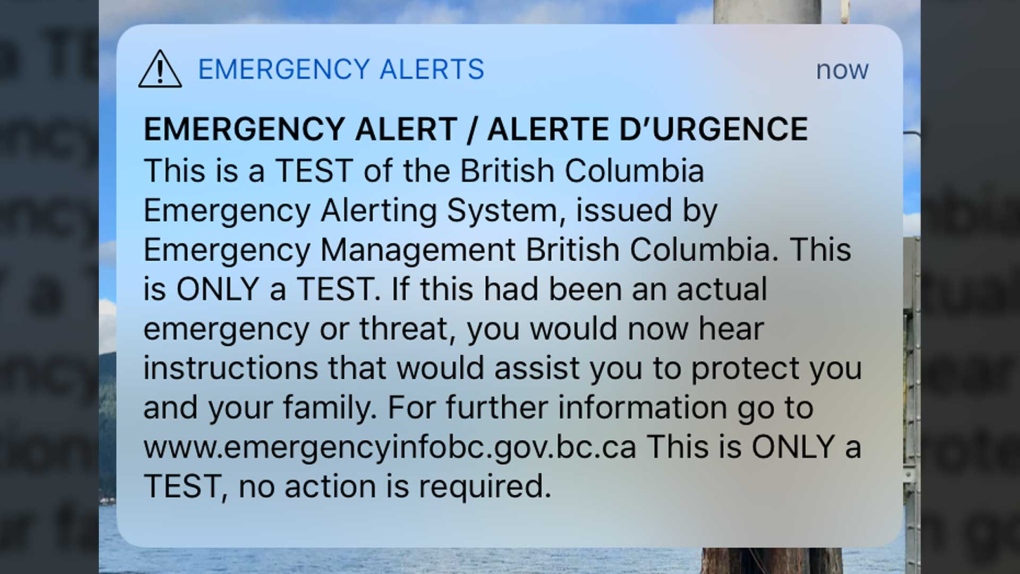 An emergency alert sent Wednesday, May 8 in B.C. is shown.

Residents of B.C. may have received an emergency alert to their cellphones Wednesday afternoon as part of a test of the province's system.

The messages were sent out at 1:55 p.m. by the Alert Ready system, and were clearly marked as tests. Alerts included a pop-up text box as well as a tone or vibration.

To receive the alerts, phones had to be compatible and connected to a cellular network. They were sent automatically at no cost to cellphone users.

For those who did not receive the alert, it read: "This is a TEST of the British Columbia Emergency Alerting System, issued by Emergency Management British Columbia. This is ONLY a TEST. If this had been an actual emergency or threat, you would now hear instructions that would assist you to protect you and your family. For further information go to www.emergencyinfobc.gov.bc.ca This is ONLY a test, no action is required."

They were sent automatically at no cost to cellphone users.

Routine tests were also performed over the radio and television.

It's a system operating across Canada, but managed locally by Emergency Management British Columbia. The intention is that residents will be quickly informed in the event of an incident such as a tsunami. The messages are meant to notify the public of the hazards in their local area.

The system was built following an order from the Canadian Radio-television and Telecommunications Commission to wireless providers. The CRTC said the system should be used to send warnings concerning public safety, and that it could also be used to circulate Amber Alerts.

Some provinces in Canada are already using theirs for alerts about missing children.

The first test was conducted one year ago, and was meant to give the public a glimpse at how it works.

On Wednesday, of the first 1,000 respondents, 87 per cent got the message.

According to Alert Ready, there are a variety of reasons why a cellphone user might not get the alert.

Did you receive the emergency alert on your phone?