'They were excited to see us': Crews rescue two puppies from Mission cliff

Four days after they were first heard whimpering on a ledge halfway up a cliff, two St. Bernard Cross puppies were carried to safety by Mission Search and Rescue (SAR).

After the unusual rescue mission, the two 16-week old female puppies were skinny and cold but otherwise in good shape – and wolfed down the dog food brought to them by rescue crews.

“They were excited to see us,” said Rodger, one of the SAR volunteers.

"They were on a cliff. We had to calm them down, make sure they didn’t fall off or jump off. They got so excited. We held out a couple jackets, they rolled into those jackets, and they came right out to us."

It was a happy ending after a tense few days for people who live in the rural area on Stave Lake Road in Mission, near the forest where the puppies had been whimpering audibly.

“It’s day four that I’ve been listening to them whining and crying. They’re obviously in distress,” said Emma Wilfert, who lives nearby. “They’re howling and crying all day until dusk.”

She and her dad trekked out into the thick forest to try and figure out where the dogs were, and pinpointed them near the top of a high cliff that she knew she couldn’t climb.

“They’re going to need proper climbing equipment to rappel down and get to them,” she said.

The canines weren’t exactly the usual targets of Mission Search and Rescue, which is normally tasked by the RCMP to get to people stuck in the wilderness.

But the volunteers recognized if they didn’t go, someone else in the area might. And if that person got stuck in the thick forest, the crews would be called out anyway.

“It’s always a concern for us as search and rescue. We want to make sure the public is safe,” said SAR manager Dean Osen.

“Hopefully the dogs are going to be more friendly. Hopefully they just want human social interaction than being aggressive and hungry,” he said. 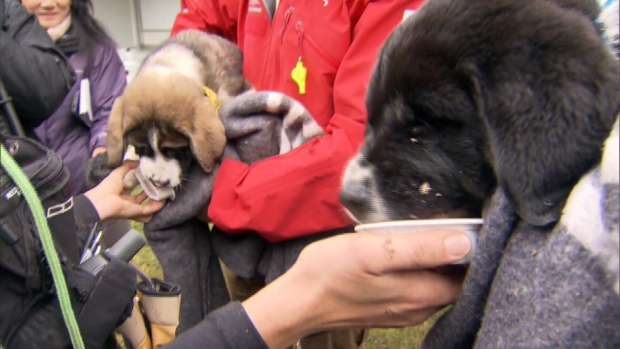 A crew of 15 split into three teams: two to approach the dogs from above the ledge, and one to approach from below.

The cliff face below was less daunting – and rescuers scrambled up near the ledge. The dogs rolled into their outstretched jackets, and they were carried, wrapped in the warm gear, back to the base.

Wilfert, who had feared the worst for the animals, started to cry. “Thank you so much for getting them,” she said as she petted the dogs and scratched them behind their ears. “I thought they would just get weak and die up there.”

They were tired – at one point falling asleep in the arms of rescuers.

Veterinarian Adrian Walton checked their temperature, gums and fur. He found the dogs weren’t hypothermic and didn’t seem to have any injuries or parasites from their time in the wilderness.

“They’re a little thin. The good news is that their temperature is nice and fine. Just get some food into them,” Walton said.

But looking at them further told a sadder story.

“Taking a look at the nails, they look like they’ve been trimmed recently. Someone was taking some degree of care of them,” he said.

Given the isolated location, and that no one near there was missing any dogs, he suspected the dogs had been dumped.

“Unfortunately some people get dogs and they are more than people bargain for,” he said. “We will be reaching out to the cruelty department of the SPCA.” 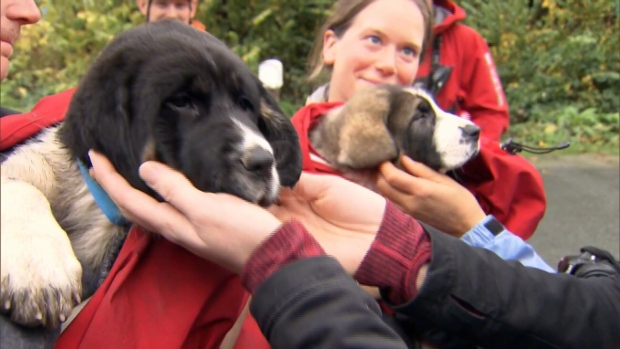