The Duke and Duchess of Cambridge arrive in B.C. to royal fanfare

Thousands of royal enthusiasts packed the lawn of the B.C. Legislature Saturday in hopes of catching a glimpse of the Duke and Duchess of Cambridge.

Prince William, his wife Catherine and their children Prince George and Princess Charlotte touched down at the 443 Maritime Helicopter Squadron at the Victoria International Airport around 4 p.m. local time, about half hour later than scheduled, to begin their eight-day tour of Canada.

The majority of their visit will be in British Columbia.

Prince William walked out of the plane holding the hand of three-year-old Prince George, dressed in a light blue sweater and shorts.

After shaking hands with the dignitaries, the family was whisked away by a royal motorcade to make a brief stop at Government House, where they were greeted by the Lieutenant Governor of B.C., Judith Guichon.

Dozens of well-wishers, many carrying signs and flowers, lined the roads leading up to the airport and around Government House to welcome the Royals. Overpasses were lined with waving people.

The Royal couple was welcomed at the Legislative Assembly shortly after, where they laid a wreath at the cenotaph after a minute of silence.

Prince William addressed the cheering crowd, saying he and Catherine are "delighted" to be back in Canada.

The last time they were in Canada was in 2011, and they had only been married three months.

"The warm welcome that you gave us at that important moment in our lives meant a lot to us, and we have never forgotten it," he said.

"That's why we're so pleased George and Charlotte can be with us this time round beginning their own lifetime of friendship with this wonderful country.

William said he and Catherine have asked to meet as many people from as many walks of life as they can while here.

He said they are both passionate about helping the environment, supporting young families and the mental health of young people.

William also referenced his 1998 visit to Whistler, when he was a "shy teenager."

The official welcome ceremony included a 21-gun salute, inspecting of the Guard of Honour, commanded by Lieutenant-Commander Michael Erwin, and a traditional dance by the Songhees Nation.

Security teams and organizers have been working around the clock on the final plans for the Royal visit.

The lawn of the Legislature was transformed with a temporary walkway, which is covered with 550-feet of red carpet. 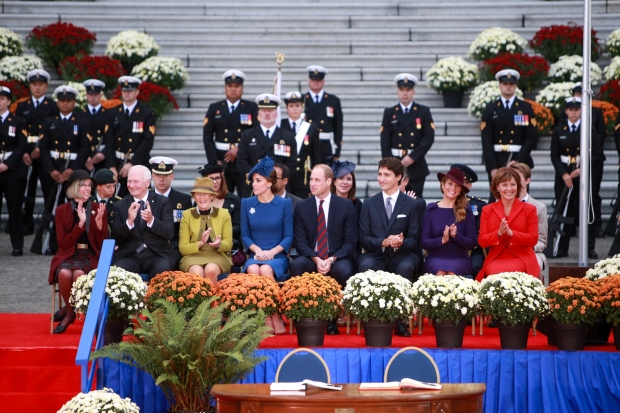 The Duke and Duchess will be calling Victoria home during their Canadian trip, staying every night except for one with their children at Government House under heavy guard.

Staff has been busy babyproofing the residence, including covering electrical outlets and ensuring fragile items are out of reach.

The chef has been preparing special menus to ensure the family gets a taste of B.C.

The Royals depart for Vancouver Sunday morning, where they will be greeted at Jack Poole Plaza and visit the newly-reopened Kitsilano Coast Guard station.

During this tour, the couple will visit the remote Great Bear Rainforest, and explore B.C.'s picturesque wine country during a one-day trip to Kelowna.

The Royals will also be introduced to a number of Canadian charities, and the issues of education, health and the environment will all be explored.

"You'll get a real sense of social justice and social caring going on with this couple through the tour," said Keith Roy of the Monarchist League of Canada.

Those hoping to see little Prince George and Princess Charlotte this week will be mostly out of luck. The children will only be seen when the Royals arrive and depart from Victoria, and at a party with military families and their children.

CTV's guide to the Canadian tour