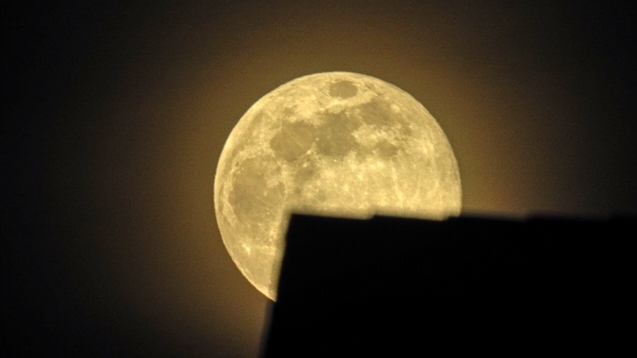 A super moon is seen in this photo taken by Sharmila Bacchus and submitted through Weather Watch by CTV.

The final super moon of 2019 has come and gone, leaving behind spectacular images of the celestial phenomenon.

Known as the super "full worm" moon, it appeared Wednesday over Metro Vancouver.

The 'full worm' moon takes its name from a time when lunar cycles were used to track the season, according to the Old Farmer's Almanac. In March, the ground begins to soften enough for worms to start reappearing.

The March full moon is also known as a "full sap moon" – a reference to the time of year when sap starts to flow from maple trees.

Metro Vancouverites captured the stunning natural phenomenon from a range of locations.

Such as False Creek.

It was also caught rising over homes in Richmond.

And rising high over buildings on West Broadway.

It looked particularly spooky as it rose in Surrey.

Wednesday's super moon is just one of several celestial spectacles residents have been treated to in recent months.

In January, British Columbians got to witness a "super wolf blood moon," a total lunar eclipse that occurs at the same time as a super moon.

Next up is a 'blue moon' on May 18, a phenomenon that usually happens once every two or three years.

The blue colour is caused by dust in the atmosphere.

According to the almanac, the term can refer two things.

It can apply to when two full moons appear in a single month.

The phrase "once in a blue moon" – which the almanac says started in 1821 – originated from this phenomenon.

It can also refer to the number of full moons in a season. Most seasons have three full moons, but a blue moon is when a fourth moon appears.