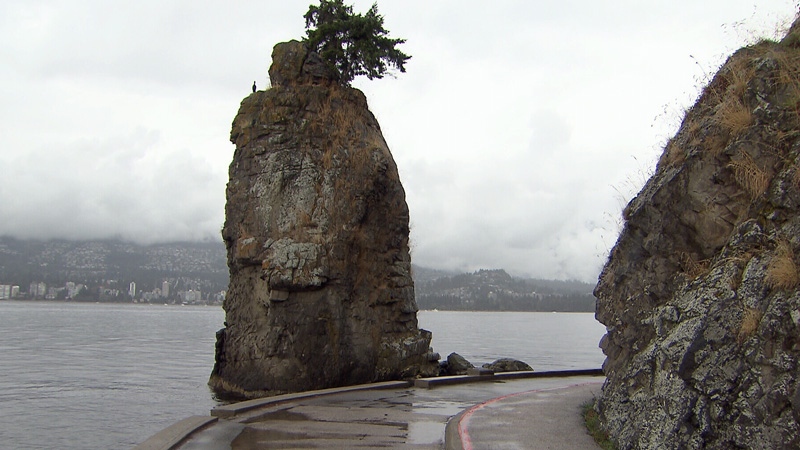 Workers will be power-washing and hand-scaling the sandstone cliff in areas where it is compromised, including at Siwash Rock and Prospect Point, the park board said. (CTV)

VANCOUVER - Vancouverites who like to get their exercise by jogging or biking around the Stanley Park seawall will need to seek alternate routes beginning on Monday.

That's when the Vancouver Park Board will begin annual slope stabilization work along the seawall between Prospect Point and Third Beach in Stanley Park.

In a news release, the park board says the purpose of the closure is "to ensure the safety of workers and protect the public from falling rocks and debris."

Workers will be power-washing and hand-scaling the sandstone cliff in areas where it is compromised, including at Siwash Rock and Prospect Point, the park board said. Crews will also be removing vegetation and debris from catch basins and along the drainage channel, as well as inspecting netting and rock anchors along to the cliff to ensure they are secure.

Rock scaling has been taking place in Stanley Park annually for nearly two decades, the park board said, noting that the work is "essential" to reducing the risk of rock and debris slides onto pedestrian and cycling paths.

Heavy rain, windstorms, ice accumulation and the spring thaw all contribute to decreased stability on the cliff face, the park board said.

Visitors to Stanley Park during the seawall closure can expect to find signs posted throughout the park recommending detours on unpaved trails.