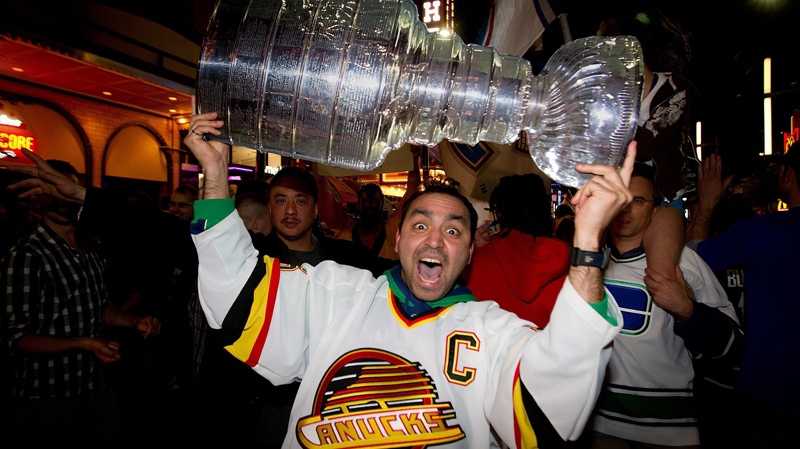 A Vancouver Canucks fan hoists a replica of the Stanley Cup over his head as people pack Granville Street in celebration after the Vancouver Canucks advanced to the NHL's Stanley Cup Final after defeating the San Jose Sharks 4 games to 1 in Vancouver, B.C., on Tuesday, May 24, 2011. (Darryl Dyck / THE CANADIAN PRESS)

The Stanley Cup final schedule has been released, with Game 1 appearing to conflict with a Supertramp concert planned for Wednesday night at Vancouver's Rogers Arena.

Because the Vancouver Canucks won the President's Trophy, the team receives home ice advantage for the first two games of the finals.

While Canucks Sports & Entertainment has yet to address the apparent conflict, it's likely the hit ‘70s and ‘80s band will be asked to "Give a Little Bit" and switch venues.

The Canucks will play either the Boston Bruins or Tampa Bay Lightning; the teams are tied 3-3 in the Eastern Conference final, with a winner to be decided in Game 7 this Friday.

The rest of the Stanley Cup final games will take place the following dates: