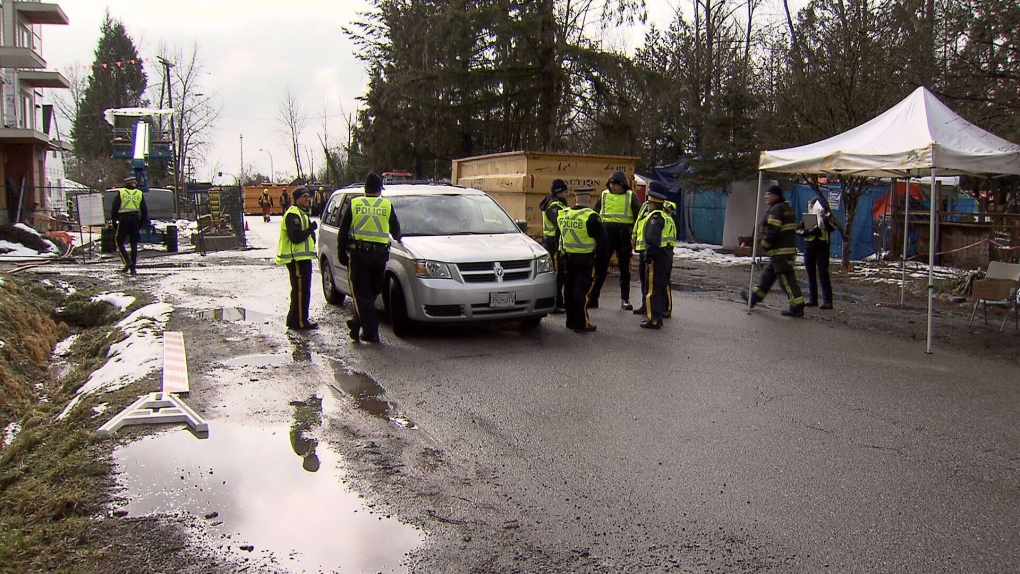 Ridge Meadows RCMP said in a release officers made the arrests as Maple Ridge fire department officials and bylaw officers entered the Anita Place encampment on Sunday to enforce the injunction granted earlier this month.

Officials say they were concerned about propane heaters and stoves posing a fire hazard when used in or near tightly spaced tents.

Pivot said in a news release Monday that some of its members witnessed the enforcement and both city officials and RCMP contravened the injunction order.

The group says police and city officials shut off heat to a warming tent and refused to restore power, impeding health care and service providers from entering the encampment and preventing residents from accessing their homes.

Pivot staff lawyer Caitlin Shane says the group will ask for an expedited order from the court in an effort to force the city to communicate with residents of Anita Place.

RCMP say in their release that three of the people arrested face charges for violating the injunction and were expected to appear B.C. Supreme Court.

Three others are charged with various Criminal Code offences, and Sgt. Brenda Gresiuk says they were expected in provincial court.

The Anita Place homeless camp formed nearly two years ago as a protest over unaffordable housing, as well as the closure of a busy shelter.

Since the camp's formation, campers have successfully defeated two legal actions to evict them.

RCMP say the arrests on Sunday occurred as officers continued their keep-the-peace duties during enforcement of the injunction.