To donate to victims of the B.C. wildfires through the Canadian Red Cross, click here.

An estimated 14,000 people have been driven from their homes by the wildfires raging across B.C., and thousands more are preparing to flee at a moment's notice.

On Monday evening, the entire city of Williams Lake, one of several communities in the province's Interior where evacuees have taken refuge, was placed on evacuation alert over concerns about a 20-square-kilometre blaze burning nearby.

That's left some evacuees facing a second or even third hurried escape since the wildfire situation ramped up significantly last week. Gary Nurmi and Janice Mitchell have already been forced to leave 150 Mile House and Deep Creek.

"Hopefully it'll clear up and we can go back home," said Nurmi. "But there's no power at home."

Williams Lake officials said the evacuation alert was prompted by a weather forecast warning the flames could be fanned directly toward the city on Wednesday.

There were 218 fires burning across the province as of Monday afternoon, though that number is said to be in constant flux. About 10 are threatening communities.

Provincial officials said they don't yet have a clear picture of how many homes and buildings have been burned, but aerial images from CTV's Chopper 9 revealed devastating destruction in the evacuated areas around the Ashcroft fire.

BC Hydro has also confirmed significant damage to its electrical infrastructure that's cut power to thousands of properties in parts of the Interior. A crew of about 60 people has been performing repairs as quickly as possible, when safety allows.

Kevin Skrepnek, chief wildfire information officer with the B.C. Wildfire Service, said 29 of the active fires broke out on Sunday, a noted improvement from earlier in the weekend that he credits to fortunate weather.

"We had in the neighbourhood of 140 new fires on Friday alone and almost 100 on Saturday, so certainly less activity yesterday in terms of new starts," said Skrepnek.

"That’s largely because we did not see the same degree of lightning activity as we had in the days previous."

The forecast remains hot and dry for several more days, however, and things are likely to get worse before they get better.

Since the beginning of April, 572 fires have been recorded across the province, about 258 of which are believed to have been human-caused. More than 400 square kilometres of land is estimated to have been scorched by the flames.

The situation escalated sharply in recent days, triggering a B.C.-wide state of emergency that’s led to increased government resources and an outpouring of support from unaffected communities both in and out of province.

Help from provincial and federal governments

Communities and residents will be partially helped by a recently announced $100-million fund from the B.C. government, which includes $600 that will be made immediately available by electronic transfer through the Red Cross to people who have registered after being forced from their homes.

Public Safety Minister Ralph Goodale said the federal government is also helping with the effort, contributing thousands of cots and blankets for evacuees as well as aircraft from the Canadian Armed Forces, which are being used for emergency evacuations and transporting fire crews.

Four tonnes of supplies, including wrapped and sealed water, Gatorade and baby supplies, have also been sent in from Fort McMurray, Alta., which was devastated by a wildfire last year. During that blaze, Ottawa promised to match Canadians’ donations to the Red Cross, but it’s unclear whether B.C. will be receiving the same. Goodale assured Monday that more federal help will be coming, but said it's too soon to provide further details.

More than 1,000 firefighters are currently deployed to help fight fires across B.C., and another 300 firefighters and support staff are set to arrive from Ontario, Saskatchewan and Alberta on Monday.

Thick smoke has made it challenging in some regions for aerial crews to figure out exactly where to drop water and fire retardant. It's also making it very difficult to estimate the size of the fires.

RCMP officers have been sent from across the province to assist with the evacuation and secure the communities affected by the fires. Those officers will spell off local officers that have been working nonstop since the state of emergency was declared. 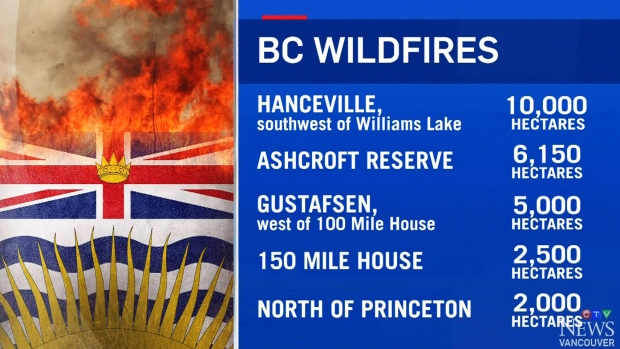 Apart from the evacuation centres in Williams Lake and Prince George, emergency resources are being offered in Kamloops, which is located about 90 kilometres east of the second-largest wildfire currently burning in the province.

The blaze, which has spread to 65 square kilometres, has forced evacuations in the Ashcroft and Cache Creek areas.

John Rustad, B.C.’s Minister of Forests, cautioned the hot weather forecast over the coming days means the situation could continue to worsen.

"The weather situation is not favourable under current conditions," he said.

Environment Canada is expecting several more days of record high temperatures and dry conditions, warning that the wildfire danger rating will remain high is much of southern B.C.

Health officials are urging residents to avoid strenuous outdoor activities and contact a health care provider if they experience any difficulty breathing, chest pain or a sudden onset cough.

Officials have also extended and expanded a campfire ban that now applies to almost all of B.C., save for Haida Gwaii and an area of Vancouver Island known as the “fog zone.”

This is one of the boards up at the @thompsonriversu evacuee intake centre in Kamloops. Hundreds fleeing #bcwildfires here. @CTVVancouver pic.twitter.com/ExdVktql1V

150 Mile firefighters are keeping a watch on the ridge lines on the east end of Williams Lake. Lots of billowing smoke here #BCWildfires pic.twitter.com/w0SstuJuJh

Chris and her therapy dog Ocean are visiting the evacuation centre here in Kamloops. They're here to meet & great anyone needing a little puppy love. @ctvvancouver 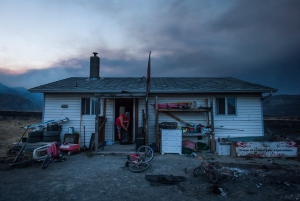 Wildfires burning out of control in B.C.