Sex workers take to the streets to protest prostitution legislation 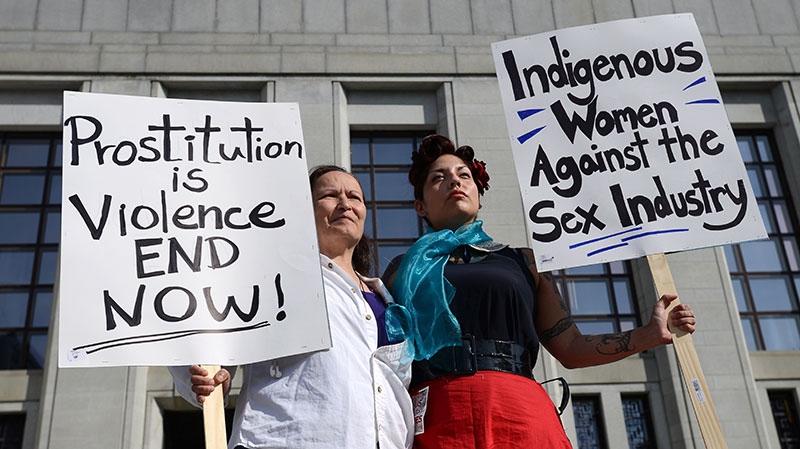 Cherry Smiley, middle right, of Vancouver, B.C., and Sue Martin , left, of Ottawa join others as they rally in front the Supreme Court of Canada in Ottawa on Thursday, June 13, 2013. (Sean Kilpatrick / THE CANADIAN PRESS)

TORONTO -- The Harper government's proposed crackdown on johns and pimps would leave prostitutes just as open to violence as under the old sex laws struck down by Supreme Court of Canada, sex workers and their supporters said Saturday.

In what was billed as a national day of action, rallies against the government's new prostitution legislation were planned in several cities across the country.

Dozens of demonstrators gathered around red umbrellas -- the sex trade's symbol of independence -- in a downtown Toronto park to speak out against the proposed law, which would criminalize the purchase of sexual services, target those who benefit from prostitution and outlaw the sale of sex near schools and other places where children gather.

"This will simply move sex workers out into more isolated and more marginalized areas of the city, and in many ways this legislation is a gift to sexual predators," said Jean McDonald, head of support group Maggie's.

"It means they can't work in groups to watch out for one another and say 'I'll be back in half an hour.' And people who would do women harm, who would do sex workers harm, will know this."

She said that, with the bill, the Conservatives are "spitting in the face" of the Supreme Court's landmark prostitution decision and ignoring the vital input of sex workers.

The legislation would also make illegal the sale of sex through print media or the Internet, and ban communicating for the purpose of selling sexual services in public places where a child could reasonably be expected to be present. Additionally, it would criminalize financially benefiting from the prostitution of others, including through online sex businesses or venues such as escort agencies and massage parlours.

Monica Forrester, who works as a prostitute, said the proposed bundle of new offences would continue to leave those in the sex trade exposed to violence -- a key factor in the top court's ruling.

"We're dealing with high levels of unsafe work conditions now navigating the laws that were struck down. These new proposed laws would just make it worse for sex workers to actually navigate services around safety, to work safely."

"Because the johns are being criminalized too, this actually puts a fear factor (in place) for a lot of johns which in turn brings on more violence," said Forrester.

The new prostitution-related offences are intended to reduce demand for sexual services, shield sex workers from exploitation and safeguard children and communities.

The legislation is the government's response to the Supreme Court of Canada's decision last December striking down chief elements of the country's prostitution laws.

In Montreal, a few dozen people took part in a dance party against the proposed law in a downtown city square.

They danced to club hits blasted from speakers and handed out flyers to passersby explaining their opposition to the bill. Several held up signs declaring "Decriminalization saves lives!"

Anna-Louise Crago, a former sex worker who now does research on the issue, called the bill "an absolutely devastating setback for sex workers."

"I believe it will fuel abuse, violence and exploitation, and fundamentally it will cost sex workers lives," she said.

The rallies come days after Prime Minister Stephen Harper defended the bill, saying that activities related to the sex trade are outlawed because they are harmful to women and society in general.

Under the old laws, prostitution itself was actually legal but almost all related activities -- including communicating in a public place for the purposes of prostitution, pimping and running a brothel -- were criminal offences.

The Supreme Court declared them in violation of the Charter of Rights and gave Parliament a year to address the situation.