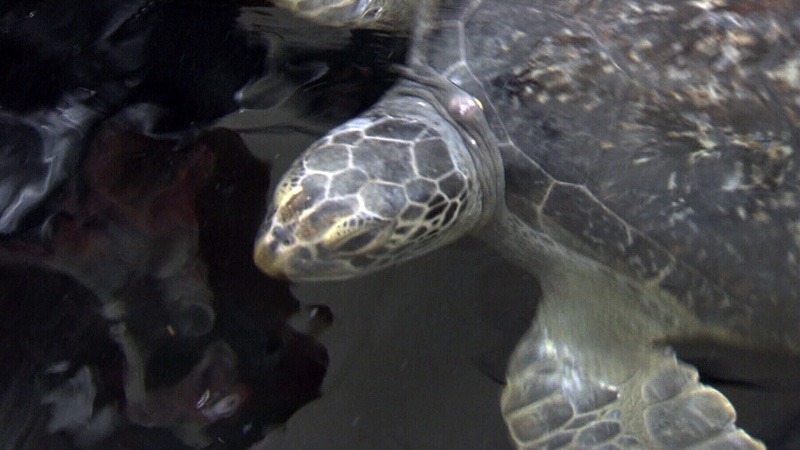 A sub-tropical turtle that somehow ended up on a remote B.C. beach will begin his long trip home this week.

The male green sea turtle, nicknamed "Comber," was rescued on a beach on the west coast of Vancouver Island in January, and treated for hypothermia. At the time, the turtle's body temperature had plummeted to 11.2 C, and it was difficult to tell whether he was alive.

After months of treatment – including antibiotics and a slow increase in ambient temperature – the travel plans have been made and Comber is ready to go back to the wild.

Vancouver Aquarium experts said the species is not commonly found in Canadian waters, so Comber had to be transported back to the U.S. after his rehabilitation.

"There is nowhere in Canada with water warm enough for his survival," Vancouver Aquarium Head Veterinarian Martin Haulena said in a statement.

"We’ve been working with Fisheries and Oceans Canada, the U.S. Fish and Wildlife Service, several U.S. aquariums, and the U.S. Coast Guard to get him back home."

The 35-kilogram turtle, who is estimated to be between 12 and 20 years old, underwent his final exam on Tuesday in preparation for his trip to the south.

On Wednesday, Comber will be picked up at the border by the U.S. Fish and Wildlife Service, and taken to the Seattle Aquarium for the night. From there, Comber will travel with Tucker, an olive ridley sea turtle rescued off the Washington coast.

The pair of reptiles will then be flown by the U.S. Coast Guard to San Diego, where they will finish their rehab at SeaWorld.

When temperatures have warmed enough, the turtles will be released into the ocean.

"Comber beat the odds and will soon return to his native waters, where he can contribute to the growth of the endangered sea turtle population," Haulena said.

Although the species is endangered, those that survive the odds can live to be more than 100 years old in the wild, according to the National Wildlife Federation.

Green sea turtles can grow to be as long as 1.2 metres, and weigh upwards of 159 kilograms.