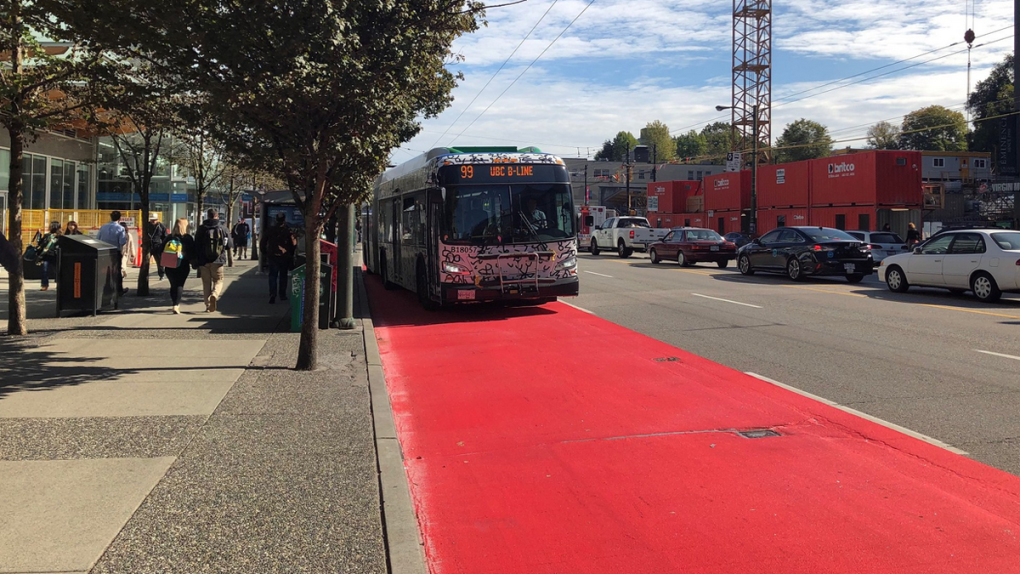 A red curb lane is shown in an image posted to Twitter by the City of Vancouver.

Red zones are popping up in Vancouver as part of a pilot project meant to remind drivers to get out of the way.

The City of Vancouver teamed up with TransLink for the initiative, which will see some lanes of city streets painted bright red.

The colour is meant to serve as a reminder to drivers that they should not be stopping at or near the city's bus stops.

Municipal officials said in a message on Twitter that the red zones will be installed at key bus stops to remind drivers the areas "aren't for cars.

"A single stopped car can slow down hundreds of people," the tweet said.

If the zones work, the city will look at installing more in the future, it said.

The decision drew hundreds of likes and dozens of comments from other Twitter users.

Some suggested removing street parking from major routes, such as Broadway, while others said city needs to add more commercial loading areas so delivery drivers have places to stop.

One Twitter user wondered why the city painted the lane, rather than just the curb. Others questioned the colour choice.

"Maybe paint words 'No stopping' or something, in addition to the red paint? My colleagues and I thought there was a red carpet event outside our workplace."

Another responded: "This never came up on my drivers' test."

Others suggested potholes and other issues were more pressing, and had more of an impact on traffic.

"How about not blocking lanes for construction?" one user posted.