The proportion of checks targeting Black people rose slightly in 2019 to more than five times their share of the population, while the checks targeting Indigenous people hovered around six times, according to the data, which was obtained through a freedom of information request.

B.C.’s solicitor-general suggested the practice could be examined again province-wide as he plans to bring back a legislature committee to examine policing.

“We’ll look at all aspects of the Police Act,” Mike Farnworth told CTV News. “And they may want to look further.”'

The Vancouver Police Department said the number of street checks dropped by over 90 per cent from January to August this year compared to last. Farnworth said that could be the result of changes to provincial guidelines, as well as the department's own policy being updated in January.

The 2019 data also show Middle Eastern, white, and Hispanic people were stopped slightly more often than their share of the population as well, which rose slightly that year.

South Asian people were stopped slightly less often what you would expect from their share of Vancouver’s population. 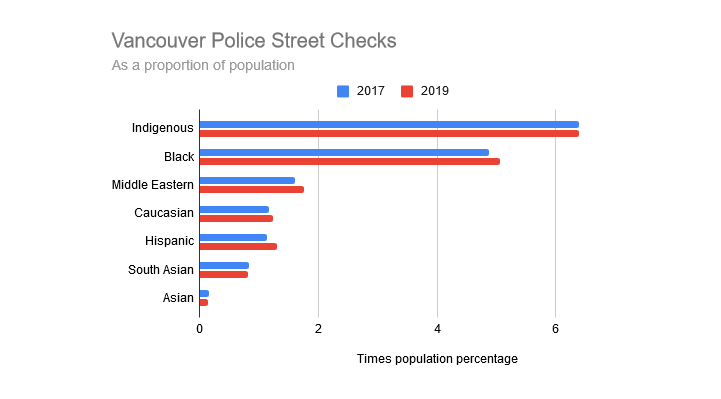 The last time street check data was released in 2018, Asian people were stopped about seven times less than their population percentage — a figure that dropped even further last year.

Harsha Walia of the B.C. Civil Liberties Association, which was among several civil society groups that pushed for change in 2018, called the continued racial disparity highlighted in the data "disappointing."

“We know that rates of violent crime are going down. If anything, the fact that street checks continue to happen point so clearly to profiling," Walia said.

The data also break down the reasons officers give for performing a street check. About 15.7 per cent of checks in 2019 were related to suspected criminal activity.

Some 19.3 per cent were because of suspicious activity.

But the largest share, 33.3 per cent, was prompted by “problem-oriented policing” — a practice the VPD describes as an “effort to identify people, premises and areas that are habitual drains on police and emergency service providers.”

On Monday, VPD Deputy Chief Howard Chow unveiled a new neighbourhood response team, solely focused on responding quickly to calls that are generally considered “lower priority.” In one week, the team was dispatched to over 200 calls, he said.

Walia said these examples are exactly what the “defund the police” movement was targeting: issues that are better handled by health care, housing, or other approaches than police.

“This has nothing to do with actual crime. This is the creation of crime by putting beat officers in low-income neighbourhoods, by having them approach people unnecessarily and creating a climate of fear, intimidation and profiling,” Walia said.

Vancouver’s city council voted unanimously to ask the Vancouver Police Board to end street checks over the summer. 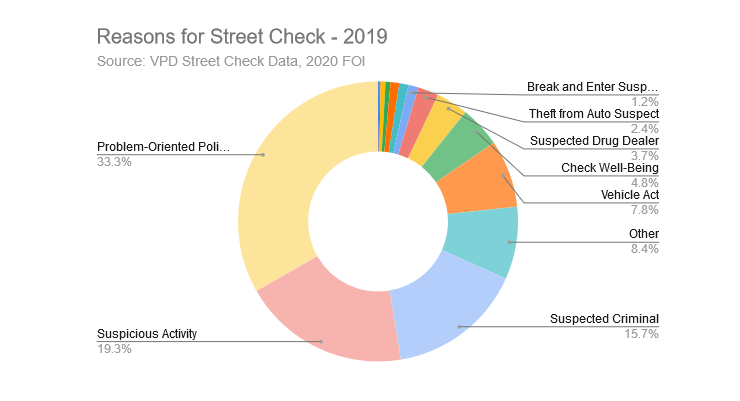 But the Vancouver Police Board in September voted to wait until a number of statistical reviews were complete, and said it would revisit the issue in early 2021.​

Street check guidelines say the interactions between police and citizens in the community must never be "random, arbitary, or based solely on identity factors, such as economic or social status, race, ancestry, colour, religion, family status, disability, gender identity and age."

The Vancouver Police Department said it has committed to audit all street checks for compliance and adherence to the provincial standards.