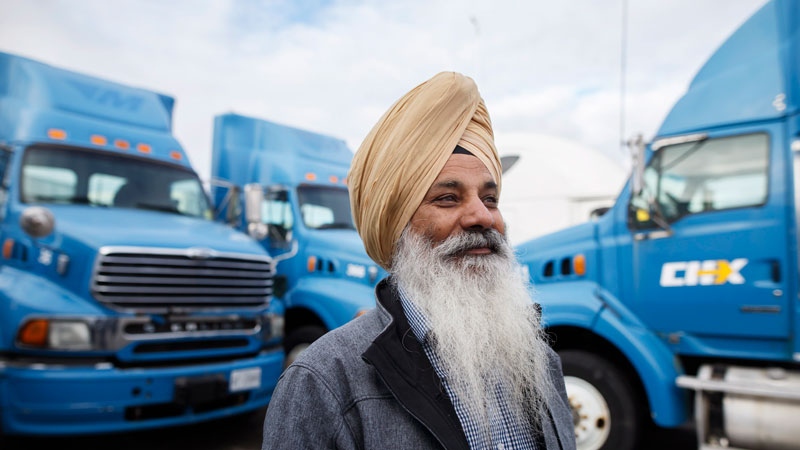 Nachhattar Chohan, president of CH Expedite stands amongst a few of his trucks in Mississauga, Ont., Tuesday, Oct. 16, 2018. THE CANADIAN PRESS/Cole Burston

Nachhattar Singh Chohan lived in Canada eight years before he tried his hand at trucking.

A former brake plant worker and gas station attendant with farming roots, the then-34-year-old marshalled his savings, bought a used Ford Econoline van and set to work delivering newspapers for the Toronto Star in 1988.

Today, Chohan runs a 20-tractor fleet for regional and long-haul freight, his son at his side in their Mississauga, Ont., office.

Once the domain of white, blue-collar big-riggers, trucking has shifted gears as South Asian Canadians fill a growing labour shortage and reroute the industry with tech-savvy and chai-vending truck stops.

In 1996, less than two per cent of Canada's truckers were South Asian immigrants. In 2016, they comprised 18 per cent of the country's roughly 181,000 drivers, according to a study by Newcom Media Inc. based on Statistics Canada's National Household Survey.

More than half of all truckers in the Vancouver and Toronto areas were born in South Asia. One-third of Canada's big-riggers are immigrants, with those from India making up by far the highest proportion at more than 40 per cent. The vast majority speak Punjabi, according to StatCan.

The group's growing heft is reflected in new organizations like the North American Punjabi Trucking Association. Launched this year and based in California, NAPTA educates members on new regulations and technology and negotiates pay rates and discounts on fuel, tires and insurance.

Decent salaries are one draw to the sector, association co-founder Raman Dhillon said.

The average salary for a truck driver in Canada is $48,733 a year, according to the Neuvoo job search engine, but more experienced big-riggers can pull in more than $100,000 annually, he said.

A labour shortage and a low barrier to entry are another lure.

The trucking industry will be short 34,000 drivers by 2024, according to a 2016 study by the Trucking Alliance of Canada. The sector also lacks the apprenticeship hurdles of the trades, though regulations vary by province.

Cultural factors and on-the-job independence come into play as well, said Dhillon, who co-founded a California truck company with his brother in 1992. Now run by their cousin, it has ballooned to a 70-tractor fleet.

“We are pioneers of trucking in India also,” Dhillon said of Punjabis in general, adding that some park themselves in the job after years of experience with agricultural equipment in the rural region.

“In Punjabi culture, trucking and driving is a passion. I drove with passion. I still love it,” he said. “My dad did it. He started his driving career when he was 16.”

In Canada, many truck drivers own their own tractors and operate as a small business under contract with a fleet.

“No bosses hanging over your head. You're just working for yourself,” Dhillon said. “I think that brings a lot of people in.”

“Trucking has been slow to come into the 21st century - we should have had e-logs years ago,” he said, referring to electronic records that track everything from location to freight loads to fuel burn. “These kids are wired right into it. That makes everything more efficient.”

Punjabi-Canadians can also now be found at every way point on the big-rig map, from repair shops, car washes and insurance companies to suppliers, dispatch units and diners - “you name it,” said Gupta of Road Today.

A pair of truck stops by the U.S. border near Sarnia, Ont., serve up dal, masala chai and parathas - a thick flatbread.

“It's the opportunity to interact and talk about what's happening back home,” Gupta said.

“It gives you an extra opportunity to relax, to feel good.”