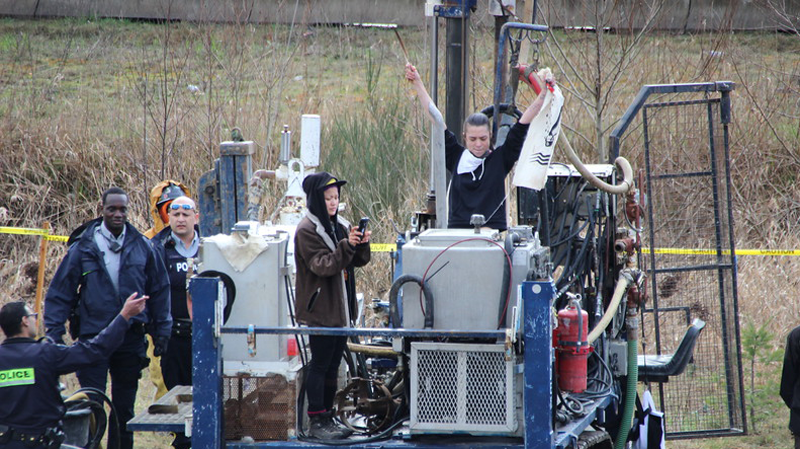 Protesters forced crews to stop work at a Kinder Morgan site near Highway 1 in Coquitlam, B.C. on Thursday.

A protester who chained herself to equipment at a Kinder Morgan worksite in Coquitlam, B.C. Thursday is facing potential charges.

The RCMP said officers arrested two people after being called to a small protest that temporarily forced crews to halt work on the site.

One of the demonstrators was released at the scene, but the other, an 22-year-old Ontario woman who chained herself to equipment using a bike lock, was taken into custody. Police said they have since recommended a charge of mischief against her.

While disruptive, the protest was non-violent and no one was injured, according to the RCMP.

"Coquitlam RCMP is an impartial party in these demonstrations," Cpl. Michael McLaughlin wrote in a news release. "Demonstrators have a right to lawful, peaceful and safe protest and the companies have a right to complete their work."

The incident follows a string of protests that have targeted work on Kinder Morgan's controversial expansion of the Trans Mountain pipeline in recent weeks.

In January, two women were arrested after police used a battering ram to break into a camper that was parked across from a pipeline terminal on Burnaby Mountain, an incident that critics decried as unnecessarily heavy-handed.